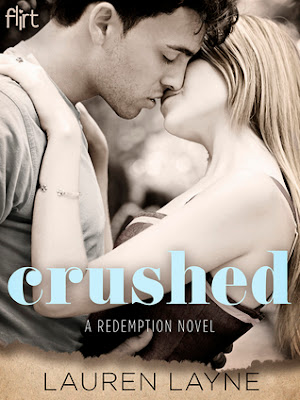 Lauren Layne’s latest novel about the healing power of redemption tells the story of a crush gone wickedly wrong, proving that what you want isn’t always what you need.

Growing up in New York, Michael St. Claire never expected to spend his twenties wearing cowboy boots. But that was before he learned about his real father, a total stranger with a family in Cedar Grove, Texas. Once in the Lone Star State, Michael meets Kristin Bellamy, who is exquisitely refined and everything Michael always thought he wanted in a woman. The only problem is that Kristin is dating Michael’s new half brother, Devon.

Kristin’s mouthy, curvy sister Chloe has always been in love with Devon Patterson. So when Michael offers to help Chloe break up Devon and Kristin, Chloe agrees to a deal that seems too good to be true. Before long, Chloe finally gets her man, only to make a startling discovery: She no longer wants the guy she had to fight for—she wants the one who stood by her side.

After all he and Chloe have been through, Michael swears he’s damaged goods. Can Chloe convince him that love is worth the risk?

I loved Crushed so so much! Michael and Chloe were awesome together! Once again this author took a story that I thought would be just meh, been there done that, and made it new and fun and refreshing. I loved it!

When Michael finds out his dad is not really his bio dad he makes a bit of a mess of things. He messes up things with his two bff's and runs away to Texas to meet his bio dad who doesn't even know about him. And his half-brother. And he is going to use his half-brother's girlfriend to get to him because...well Michael was not in a good place. He doesn't want to care and wants everyone else to hurt as much as he does. His life imploded and he doesn't know how to fix it. Only then the girlfriends sister shows up and gives him a better idea. Chloe, the sister, is a bit out of shape, has crazy curly hair, says whatever she wants, and Michael can see right away that she is in love with his half-brother Devon. And Michael knows exactly what that is like. He know what it is like to pine for someone who doesn't notice you that way and doesn't want her to go through the same pain he went through.

So Michael steps in to help Chloe break up Devon and his girlfriend. He gets her to start exercising more and they start hanging out more and slowly but surely they start falling for each other. These two were so much fun to watch. Chloe is insecure and thinks she just wants to use Micahel, and Michael really likes her, but can't be that second choice person until the person you really like realizes how amazing you are. There are a lot of ups and downs in this story, but I loved it so much. Chloe was awesome. I loved how funny and fun and wonderful she is. Michael is as well even if he doesn't realize it. And the two of them together? Amazing. They are perfect for each other. Such a great read.