Stay With Me by Jenny Anastan 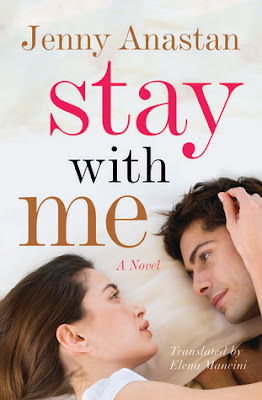 Zoe thought she could accept the terms of their affair: exceptionally hot, no-strings-attached sex. But when Andrew coldly informs her of his impending move to New York—and unknowingly turns her world upside down—Zoe tries to forget her unspoken wishes for something more and attempts to move on with her life.

Just as she seems to have found a bit of stability and serenity, Andrew unexpectedly reappears—as the fiancé of Zoe’s vapid, cruel cousin, Ashley. Harboring a secret hope that remains undiminished by time, Zoe attempts to keep her distance and protect her heart. But Andrew’s presence is hard to ignore. And if he uncovers the truth, Zoe will be forced to face the consequences of their past and risk opening herself up to an uncertain future.

I was not a fan of Stay With Me. The one good thing about the story? It is not that long. Or doesn't seem very long and I was able to read it fairly quickly. Otherwise a no go for me. *some slight spoilers ahead*

Zoe was in love with Andrew four years ago. They had a sex only arrangement and she kept hoping that he would change his mind and fall in love with her like she did him. Only he left her crushed, pregnant (he didn't know), and alone. Now it is four years later and Zoe is still hung up on him. Still loves him even though I have no idea why. And her daughter takes after him, but she loves her life as well. She has some people who are like family to her and her cafe and her daughter.

Then her sort of cousin comes back to town with her fiance in tow. Her fiance Andrew. The very same Andrew that Zoe was/is in love with! Oh noes! What to do? Whine about how much you love him and how he hurt you, let him treat you like crap again and again and still love him/try to justify his actions to others and just generally be a doormat. I hated Andrew, he was terrible to Zoe. Everything he said and did was horrible. I hated hated hated him. And Zoe wasn't much better because she would just excuse everything he did because she loved him. He is just the best thing ever so it is fine that he tears her apart all the time. And is marrying her cousin, but keeps trying to seem like he wants to sleep with her. Ugh. Not cool. His treatment of Zoe was so not cool.

So yeah. When Andrew finds out her has a daughter things are a bit tense, and then they get a bit better since they have to at least pretend to be nice to each other for the daughter's sake. That and his fiance is...he kept defending her and the things she would say/do to Zoe and I didn't get it. The end with the fiance? Oh my goodness. Major eye roll involved. It was just like seriously? Seriously you want me to believe this? You don't actually give specifics, but you want me to believe some general nonsense? Okay. Plus when Andrew finally gets angry with his fiance and when he talks to Zoe about her it is like he knew what she was about all along so why try to defend her to Zoe and make his fiance look like an angel? I didn't get it.

I also thought the reason he gave for going away four years ago was incredibly lame! Like I may have been able to forgive what happened if he had a good reason for being a jerk forever, but his reasons? BS. So overall this was not the book for me.