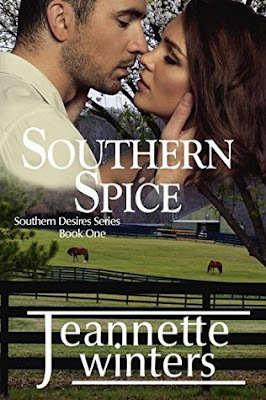 Derrick Nash knows the pain of loss. But is he seeking justice or revenge? He doesn’t care as long as someone pays the price.

It is Casey Collin’s duty at FEMA to help those in need when a natural disaster strikes. After a tornado hits Honeywell, she finds there are more problems than just storm damage. Will she follow company procedures or her heart?

Can Derrick move forward without the answers he’s been searching for? Can Casey teach him how to trust again? Or will she need to face the fact that not every story has a happy ending?

Southern Spice was an odd read. The characters didn't feel real and everything suddenly wrapped up in a nice little bow at the end. It wasn't the worst read ever, but it wasn't very good either.

This is the story of Casey and Derrick. Derrick who lost his wife and daughter in an accident. Or so everyone says. He doesn't believe it. He thinks someone is at fault and he won't rest until he finds justice for them. For the past five years since the accident he has closed himself off from people and he definitely has some survivors guilt. He should have been there with them and then maybe he could have saved them.

Casey works for FEMA and is in Texas to help after a tornado hit a small town. A town where Derrick happens to be even though he rarely comes back there as it is too painful for him. She has a few misadventures that have her lost and then stranded at Derricks during a storm. The two of them are attracted to each other, but can anything happen when Derrick really isn't over his wife and child's death yet?

Now this book was a strange read for me. You get a lot of the characters thoughts, but these thoughts didn't seem real. It was more a way to let the reader know some information, but oftentimes I was like why would he or she think this? It was odd. Also Casey hurts her knee when she gets stranded at Derricks and the first two days she can hardly walk on it without a lot of pain and then suddenly she is moving all over the place. Walking around and half running up the stairs and it left me confused. If her knee was that injured did it suddenly just heal? It didn't make much sense to me.

So yeah this was an odd read for sure. The characters thoughts didn't read as real to me, and the ending? Well everything suddenly is fine and dandy. Sure. Okay. Not the read for me.