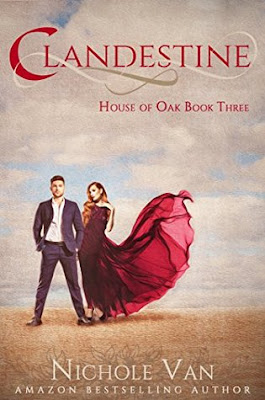 Fate will draw two people together, traveling centuries if necessary. But even so, predestined lovers still have the choice to walk away . . .

In 2014, Marc Wilde--martial artist and actor--finds his life a mess. His latest film, Croc-nami, is being trashed on social media, sending his acting career into a tailspin (crocodile pun . . . nice). His dating history isn't much better. Romantic love? Not so much. And then there is the tiny matter of blackmail. Someone knows about the time portal in the cellar of Duir Cottage and is threatening to tell the world unless Marc pays up. So yeah . . . life not going so well.

In 1814, Kit Ashton has problems of her own. Her brother has disappeared (again), leaving Kit penniless and forcing her to take up employment as a lady's companion (sigh). Worse, there are French spies in the area, and Kit finds herself pulled into the conspiracy. Add in the sudden appearance of a wind-swept, silver-tongued rogue who makes Kit want to flirt, flirt, flirt . . . it all leaves her one misstep from disaster. Kit is determined to find her brother and return home, all while guarding her heart and (most importantly) keeping her secrets . . . well . . . secret.

This hilarious, quick-paced installment in the Amazon bestselling House of Oak series can easily be read as a stand-alone book.

Oh, I love these House of Oak books! The characters are always so much fun to read and I don't even mind the time travel aspect, something I usually have issues with. In fact, I like it. The author uses it in a really fun way.

Marc is an actor. A B-list actor right now, but he has hopes of being in better movies in the future. That is until his most recent movie, Croc-nami, was panned by a huge social media lady. So now he probably won't get much more than he already has. Which is a bit depressing as he is really trying. That and his love life is not so good. He doesn't really understand how to have that lasting love with someone. He thinks he is just not cut out for it. So the same day he sees his newest movie being panned, he has a bad run-in with one of his exes, and he gets a letter from someone blackmailing him! They claim to know about the time portal in Duir Cottage and will reveal it to the world unless Marc pays up. It is really not a very good day for Marc.

Kit is in 1814. She is a lady's companion after her brother runs away and leaves her penniless and trying to find a way to survive. Plus find him so he can come back home and take his rightful place with her. Because she needs him. He is all Kit has and she is not going to lose him and everything she has ever known too.

When Marc gets sent back in time through the portal accidentally he is not really sure what to do. At least his sister had told him her stories of the past and he knows of a few people that might help him out if he can get to them. He runs into Kit pretty much right away and these two were amazing!! I loved them together so so much. This story is so much fun to read! Kit and Marc hit it off, but they both have secrets. Marc that he is from the future and who knows what Kit's is. They have a rough go of it at times because they don't trust the other with their secrets, but Marc knows his is a doozy and most people wouldn't believe him, but eventually he gets to the point where he likes Kit so much he is willing to risk it. He is willing to tell her and see what happens. He can't stay in the past no matter how much he might come to care for Kit. He just can't. His whole life is in the future and he is not really cut out for this formal past life.

When Kit's secrets were finally revealed I loved them so so much! They both have some hard choices facing them, how can they have a relationship through time? And what of Kit's secrets that might ruin everything? It was a lot of fun. I loved the back and forth between these two. They are so quick and funny and it was great watching them fall for each other. I can't wait to read more from this series, especially the next book with Viscount Linwood!