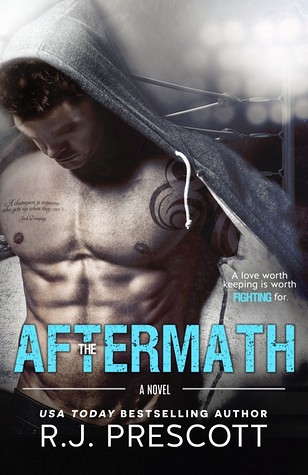 Cormac “the Hurricane” O’Connell’s star is on the rise. Billed as the most promising young boxer of his generation, his new career is taking him to places he never dreamed. But O’Connell only needs one thing in life: his wife. In her final year of college, Em cannot follow him around the world but together they make it work.

Just when everything they ever wanted is on the horizon, the past resurfaces to haunt them and O’Connell realizes that justice might not be a part of his happy ever after.

He couldn’t protect Em once before, but in the aftermath of the hurricane, he will make sure that never happens again.

The Aftermath was a fun read. I really enjoyed the first book so it was nice to get to spend a little more time with these characters. Please note you should have read The Hurricane prior to reading this book. It is a continuation of the same story.

In this book we are told the story solely from Con's point of view. He is married to Em and things are going great, though her step-dad's trial is coming up and adding more pressure on her. Con is definitely the kind of guy who wants to fix Em's problems for her so she doesn't have to face them, but that is not really possible here. She starts getting letters with photos of Frank's abuse and it just starts freaking her out. What will happen if he gets off? What will they do then? And if that happens will Con snap and go away instead? It was a rough time.

Em is strong and even though Con knows this he still wants to fix everything for her. When he gets the chance to fight for the heavy-weight title he doesn't want to. He wants to put his life on hold so he can be there for her every step of the way with Frank's trial, though she won't let him. This fight is huge for him and she knows he can win it, knows he can do amazing things, and won't let him throw all that away just for her. She has a whole family now to look after her, all the boys from the gym, so she can survive this.

Now the real issue is Con has a bit of an anger problem. He can't get what Frank did out of his head and he doesn't really know how to deal with it. He is afraid that he will get off and something will happen to Em again. That he won't be there to protect her like he should. He has a lot rolling around in his head and if he doesn't figure out how to deal with it, how to train without his anger and really focus, he might not be able to do everything he should. It was nice getting to see his point of view, get to know Con a bit better since it is all his thoughts. I did miss Em's point of view though, but it was still a good read. I enjoyed seeing these characters work through all of this stuff. All of these rough times where you really are kind of helpless. Where you have to just let things happen and hope for the best. Con and Em are still amazing together and I love how she pushes him to be his best self. How she doesn't let him just hide out and use her protection as a reason to not do things. It was a fun read.