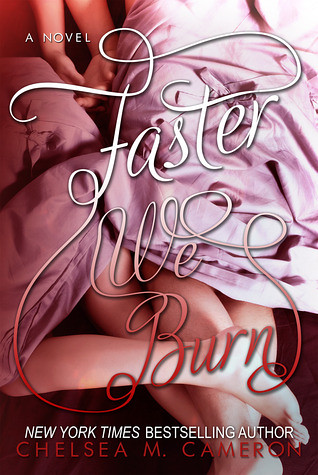 
Katie Hallman is done with douchebags. Done with guys who treat her like crap and leave her broken. But then Stryker Grant is there anyway. With his numerous piercings and bleached hair, he’s the polar opposite of all of her past relationships, which makes him the perfect candidate.

At first, Katie just sees him as a physical escape from her previous rocky relationship, and Stryker doesn’t seem to mind just being a distraction from Katie’s problems. But soon he’s getting under her skin, peeling back layers she’d rather keep covered. She tries to make it clear that she doesn’t want a relationship, but keeps breaking her own rules.

Then a tragedy sends Katie into the only arms who are there to catch her, and she’ll realize that she needs him more than she ever thought possible. But is she ready to let herself trust another guy with her already-battered heart? Or will she push him away to protect herself from getting hurt again?

Faster We Burn was a great read. I love the way the author deals with issues that come up along the way to happily ever after. Where some might invent drama just for the heck of it, this one has the characters be simply amazing and how I hope I would be if I were in similar situations.

Katie is obsessed with pink, pretending to be perfectly fine, but really she is broken. If you read the first book in the series, Deeper We Fall, you might remember that Katie dated Zack throughout that story, Zan's super awful brother. Zack is not good new, not someone you would want to be with, but Katie can't seem to make smart decisions when it comes to him. She always thinks that he won't hurt her, things will be fine, it is okay she just has to finish this on her terms, etc. Through all of that she doesn't come out unscathed.

Stryker knew there was something special about Katie when he first met her. He wanted her, but he doesn't know if he can give her what she deserves. When she wants a sex only relationship he is totally on board. Only things start changing, everyone starts feeling, and Katie in particular does not handle that well. She doesn't want to want Stryker as more than a physical release and she could be really mean when she wanted to. I loved that Stryker just rolled with the punches and was whatever Katie needed. He was so kind and supportive and this person that she can really trust and turn to whenever she needs something. He will always be there for her no questions asked.

When Stryker does something that could have had Katie completely blow up on him they talked it out instead. It was a weird situation, but I loved that they were adults about everything. I was so happy to see these two characters fall for each other even though they both have issues. They are perfect together, but getting to that happily ever after is not easy. Katie is very standoffish and very much like no! This must only be physical even after it obviously was more than that. You could really feel her struggling with her demons and trying to fight them in the end. Such a great read and I am excited to read more from this author.