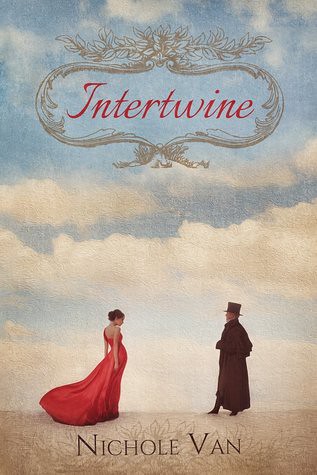 
Time is not a river. It is a vast cosmic sea. Where each life exists as rippling circles on its surface, past and future being eternally present. And occasionally, one expanding ring intertwines with that of another, weaving the lives of two people together...

In 2012, Emme Wilde can’t find the right guy. She wants to feel that swept-off-your-feet dizziness of true love. But so far, her dating life has come up short. Star Trek geek? Nice but too serious. Hippy artist? Cute but too vulnerable. Instead, Emme obsesses over the portrait of an unknown man in an old locket. Granted, a seriously dreamy guy with delicious, wind-swept hair she just itches to run her fingers through. But still. Dead men may be great listeners, but they are not exactly boyfriend material. Emme travels to England, determined to uncover his history and conquer the strong connection she feels.

In 1812, James Knight has given up finding the right woman. All he wants is someone to share his love of adventure. Instead, his life has become a Shakespearean drama. His brother languishes in a tragic star-crossed romance. His beloved sister clings to life, slowly dying of consumption. But then he finds a beautiful mystery woman, dripping wet and half-dead, beneath a tree on his estate. Now if he can uncover her history, perhaps adventure—and romance—will find him at last.

Intertwine was a great read. I loved the writing style even if I didn't necessarily love what was written if that makes any sense. I was drawn in with the language and structure of the story, but the beginning did drag on a bit. It was definitely a slow start to a great story.

Emme finds a locket at an estate sale and is drawn to the guy who's photo is in it. There is an inscription on the locket, but no actual names. The only things she has to go on is "F". She is kind of obsessed with the locket, it has ruined some relationships in the past, and that was kind of odd. She spend years thinking about who the guy could be and finally decides she needs to try and move on. To put this behind her. In order to do so she is going to find out everything she can about the owner, the guy in the locket, and hopefully that will help her move on. She goes to England to stay near where she thinks the man lived and see what she finds. I should also note that she has a very adventurous travel life, even if she doesn't necessarily want it to be so. Things just happen when she is traveling, like getting attacked by pirates and luggages mishaps and everything that could happen does. It was fun.

James longs for adventure. He is in 1812 and must stay on his estate and help his sister who is ill. He wants to go travel the world, but he can't. He wants to be there for his sister as well and unfortunately she needs him.

"Perhaps not all of him wished for change. His head and most of his left hand did seem generally free of wanderlust. Perhaps his elbow too. But both his feet and his heart - yes, most definitely his heart - itched for adventure."

He thinks nothing exciting will ever happen to him, even though he desperately wants it to, until he find a lady half dead in a horrible storm on his estate. Of course this lady is Emme, and James cares for her while she is unconscious. He is drawn to her, but when they find her locket with a picture of a guy who looks remarkably like him, though with the name that starts with F, he knows she might be spoken for already.

This story was fun. When Emme wakes up she can't remember who she is or anything about herself. She just has to continue living and trying to figure out what is going on. Who is F? Does she have a love somewhere who is searching for her? Or can she give into her growing feelings for James? It was really a lot of fun to read. Some of the scenes were just hilarious. Like when she makes up her backstory with Princess Pepsi of Toyota Camry and so on. What a hoot! She is always doing things that are not quite correct, like offering to shake someones hand, but can't seem to remember the correct way to curtsy and such. It is all a big mystery and fun times. I loved watching her and James grow closer and try and figure out who she really is.

Now overall I did really enjoy the story. As I said the beginning dragged a bit, but I loved the writing so much I didn't mind too much. There was one thing that really bugged me though and that was when Emme awoke and didn't know who she was they had to come up with a name to call her. They went through a few E names (since the locket was addressed to E and they all assume that is her), and settle on Emma since she feels that is close to her real name. Fine, no problem there. The issue? Well when the story was focused on her, when it was her thoughts and feelings, she is referred to as Emme. When someone else is the focus it is Emma. I kept thinking that she got her memory back as it doesn't make any sense for her to be Emme when she doesn't remember she is Emme! Honestly when she woke up I thought she was kidding about the loss of memory because of this. It was confusing and I don't understand. If she is Emma she should be Emma. A little thing, but it kept bothering me throughout the story. Still a really great read and I can't wait to read more!