Before That Night: Cain and Addison Book 1 (Unfinished Love #1) by Violet Duke 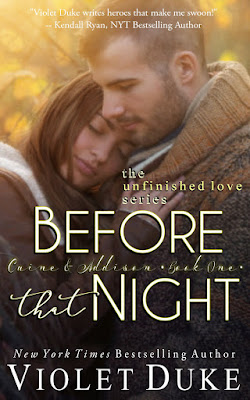 Before that night, Addison Millan had been just a college dropout secretly raising her two young siblings in a beat-up minivan she’d bought with her first semester’s tuition refund—the only money her addict mother hadn’t taken off with when she’d abandoned them the year prior.

Before that night, Caine Spencer had been just a rough, gruff cop sent to check out the phoned-in claims of suspected child neglect involving the same woman he’d met a month ago when she’d first served him the city’s worst diner coffee...which he’d been drinking daily ever since.

Before that night, Addison would never have thought the man she’d been fighting hard not to fall for—her only friend in her new shadow of a life—would be in a position to rip her family apart.

Before that night, Caine would never have believed any woman could make him fall head over heels, let alone make him feel so damn compelled to look the other way when it came to his job.

Then that one perfect night changed everything.

BEFORE THAT NIGHT (Book 1) chronicles the destiny-altering events that take place seven years prior to EVERY NIGHT WITHOUT YOU (Book 2), Caine & Addison’s emotional story of love, sacrifice, and the lengths one will run—and chase—when their past threatens their future.

Before That Night is part one of the story of Addison and Cain. I knew going in that this was the before story, what happened seven years before the events of the next book. As such I knew it would end without a happily ever after, but gah! I want to read more right now! I can't wait to see what happens next.
This story was an interesting read in that it read as though someone was telling you a story and not that you are in the story. Like you are told what people are thinking and feeling like they are telling you what happened in the past. It was interesting and not always my favorite way to tell a story, but in this instance it worked.
Addison has not had an easy life. Her mom is not there and so she has  been in charge of raising her two siblings all by herself. She is young, but determined to keep them all together. When her mom runs off she has to give up going to school so she can get a job and try and make a home for her brother and sister. She would do anything for them and she works really hard to try and save up enough money to get an actual place to live. Plus she is biding her time until she can try to get full custody of her siblings.
Cain is a police officer who comes into the diner where Addison works every night for dinner. At first she is pretty skittish, but slowly the two start to get closer. Addison is not very experienced with guys as she has never had time,  but Cain is so sweet with her. He knows she is hesitant and tries not to scare her away. He also cares about her siblings as much as she does. Oh he was wonderful. He was great with all of them and wants to become a real family. Oh so sweet! So I kept reading thinking what in the world will happen to change all this awesomeness??
Now overall I did really enjoy this story, but it did have a few moments where it felt a bit off for me. Mainly having to do with how much time has passed. I could never tell and sometimes there was an event that would be referred to that hadn't happened yet, but then the next thing you know something else is going on and it was a bit confusing. Like Cain made plans to take Addison's siblings for the day, getting breakfast and going to the movies. It was a big deal when they were talking about it, but then next thing Cain is working to try and find a missing kid and the sibling date was never mentioned again. Did they go to the movies together? Did Addison get a day alone? It felt like an important event, and yet it wasn't followed up with. And I couldn't tell if when Cain was working to catch the kid if it was the next day, the next week, the next month. Honestly I have no idea over how long a timeframe this story takes place. That was the one thing that kept me from giving this story a higher rating.
Overall I did really enjoy this story. It was an entertaining read and I can't wait to see what happens next!
Rating: ★ ★ ★1/2
3.5 stars