Blog Tour: All The Rage by T.M. Frazier 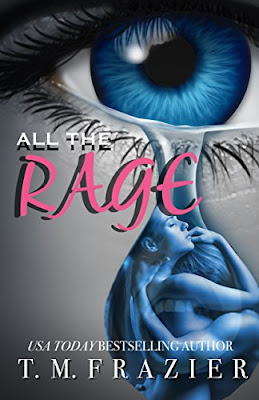 
They call me Rage.
My real name is like a shadow, always close behind, but never quite able to catch up.
I fly under the radar because no one ever suspects I’m capable of the kind of brutal violence I commit each and every day.
You see, I’m a girl. I’m nineteen.
And I'm a killer.
This life is all I know. It’s all I want to know. It keeps the s**t buried that I need kept buried. It allows me to live without thinking too much.
Without dwelling on the past.
Until him.
It all changes when an ordinary boy becomes my next target.
And my first love.
I have to choose.
The only life I’ve ever known has to die, or he does.
Either way, I’ll be the one pulling the trigger...

All the Rage is a STANDALONE.

I swear every book I read by this author just gets better and better. All The Rage is no exception. I was curious about Rage after reading Bear and Thia's story and she was so much more amazing that I ever thought. Such a unique character and I really enjoyed this story. I loved seeing the other storylines be tied in and ah! I can't wait for more!

Rage has never been "normal." She doesn't feel things like normal people do. She wouldn't even think to help someone in trouble unless it is one of the very very few people she cares about. Everyone else is just nothing to her. Or maybe exciting depending on what she gets to do to them. She was a fun one. She is a unremorseful killer and while she tried to pretend when she was younger she is now free. Free to be herself and who she is. A heartless killer wrapped up in an cute girls body. I love the whole idea really. I love that she doesn't usually feel things, but she does care about a few people. She is capable of it, but you have to be worth it. I love that she can get close to people because no one would suspect that she is as deadly as she is. I love how she still talks to her parents every day because, well she cares about them even if she doesn't want them to know what she is really doing. Plus she is a bit of germaphobe and hypochondriac. Fun times!

Nolan is a guy who was going to school on an ice hockey scholarship, but then his knee got messed up. He is also the guy Rage is supposed to be babysitting. Only things don't go exactly as planned. As soon as Nolan sees her he knows Rage is something else. He knows she is special and he wants to be with her. He was awesome! Rage is so experienced in a lot of things, but relationships is not one of them. She would get scared and try to run, but Nolan won't let her get far. I loved his possessiveness when it came to her. How she was his and she needs to get with the program and stop running from him. They were perfect together!! He pushed her just enough to get her to see how amazing they would be together. Sure she is scared as she has never felt what she is feeling with him, but he was so sweet. He doesn't care who or what she is, he just wants to be there for her. He knows her. He is probably the first person to ever really see her and get her. Amazing.

Now this is still a T.M. Frazier book so you know it is not all sunshine and roses. Things get a bit dicey at times as only she can write. But this was also one of the tamer books of her. It was nice to just have a "simple" story of these two not so simple people. They both have secrets, they both have things they are trying to hide, and when they come out it is not easy. But they also love each other and so how can they not be together? Such a great read.

She attended Florida Gulf Coast University where she specialized in public speaking. After years working in real estate and new home construction, she decided it was finally time to stop pushing her dreams to the back burner and pursue writing seriously.

In the third grade she wrote her very first story about a lost hamster. It earned rave reviews from both her teacher and her parents.

It only took her twenty years to start the next one.


It will not be about hamsters.