Against the Tide by Nikki Groom 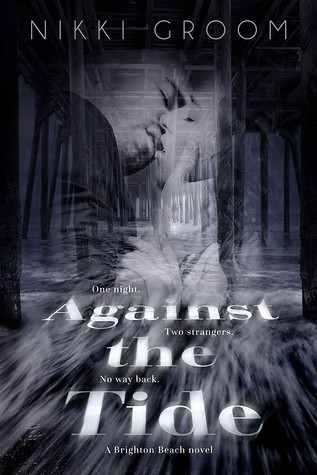 
I was happy until I met him.
I was content until I met her.
That's a lie. I was lonely.
That's a lie. I was incomplete.
He was nothing but a handsome distraction.
She was nothing but a pretty pastime.
That's untrue. He changed my life.
That's untrue. She altered my world.
I blame him.
I blame her.
I blame myself. He wasn't to know.
I blame myself. It wasn't her fault.
I don't want to need him.
I hate that I want her.
There's no easy solution.
There's no going back.

Against the Tide was just an okay read. I thought this would be the story of two people who have to overcome so much to be together, but while reading this I thought is this it? A bit disappointed in what the situation actually was and I never really felt like I knew the characters. I usually didn't understand their thoughts and actions and it was just an eh read for me.

Meg is in a relationship with a drug dealer. She thought she used to love him, but there hasn't really been anything between them in a long time. He still thinks she is his, but she is apathetic at best. He is gone for long periods of time and she doesn't really care. In fact she is happier when he is not there, and yet she won't do anything to change the situation. I am not entirely sure why she won't break it off with him, I know she had some weak excuse, but it never felt real.

Finn has a terminally ill mother and does everything he can to take care of her and his little sister. He goes to a club sometimes to blow off some steam and it is there where he first meets Meg. Only they don't really do much but lock eyes across the crowded room. They both want the other, but never do anything to act on it until one fateful night. They hook up in the back alley without really know anything about each other. They just...they just hook up. It was not so good. I don't mind random hook ups, but these two were just strange for me to read. I couldn't figure them out.

After their hookup some things happen that make Finn angry and he take his anger out on Meg. She has to have known what was going on, she has to be a bad person, whatever. Whenever he sees her at her work (a tattoo parlor) or anything he is kind of mean. And yet she still wants him for some reason. Then suddenly he does a 180 and realizes that he is being unfair to her and they should date and live happily ever after. There are some other circumstances that I didn't care for much and it was all a bit much. Of course the drug dealer is not happy that Meg wants to move on with someone else and he added a lot of lame drama for drama's sake. I was hoping for a gripping story, but instead I got characters that didn't feel real and a story that was a bit too much for me to believe.