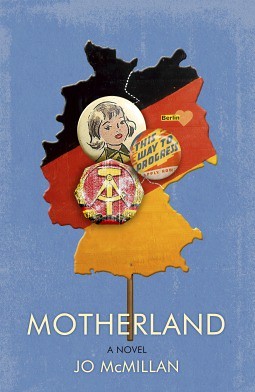 
'I hadn't expected the Berlin Wall to be clean and white and smooth. It looked more like the edge of the swimming baths than the edge of the Cold War. On the grass of No-man's Land, fat rabbits ate and strolled about as if they'd never been hunted and nothing could disturb them. This was their land and they ruled it, and there were three parts to Berlin: East, West and Rabbit.'

It is 1978, Jess is thirteen and she already has a reputation - as the daughter of the only communist in town. But then, it's in the blood. The Mitchells have been in the Party since the Party began. Jess and her mother Eleanor struggle to sell socialism to Tamworth - a sleepy Midlands town that just doesn't want to know.

So when Eleanor is invited to spend a summer teaching in East Germany, she and Jess leap at the chance to see what the future looks like. On the other side of the Iron Curtain they turn from villains into heroes. And when Eleanor meets widower Peter and his daughter, Martina, a new, more peaceful life seems possible.

But the Cold War has no time for love and soon the trouble starts. Peter is dispatched for two years of solidarity work in Laos. Friends become enemies, and Jess discovers how easy it is to switch sides, and how sides can be switched for you, sometimes without you even knowing.

Motherland is a tender mother-daughter story and a tragi-comic portrait of a childhood overcome with belief. It's about loss of faith and loss of innocence, and what it's like to grow up on the losing side of history.

Motherland was a bit of a dissapointment for me. I was really looking forward to reading a story about what East Berlin was like at the time, but this book spent hardly any time there. Eleanor did go over for the summer to teach, but you don't get to see much of that. It was really just a story about a mom who fell in love with a guy and they couldn't be together. It was not the best read as none of the characters except for the mom were flushed out at all. I really couldn't tell you much about the girl telling the story, Jess. I draw a blank when I think of her (and pretty much all of the other characters).

One thing I did enjoy at the start was how Jess described things. It was in kind of a poetic way. A bit of a puzzle at times or really creative descritptions. The story started off great with Jess and her mom selling their paper on Sat morning and I though this is going to be great! I can't wait to see where this goes. Only it felt like it didn't really go anywhere. It was just snippets of stories of things that happened and most of the time they didn't feel that significant or were really important enough for a story.

This is a hard one to write a review for as I read it a few days ago and now I'm trying to think of what happened in it and it is just blank. The mother is very devoted to the Party, at some point **spoiler alert** I think Jess gets disillusioned, but when I have no idea. It was just at the end she wasn't all into it anymore, but I never saw the progression. It didn't feel like there was much to the story so I don't have much to say about it. It was...just not my favorite read.