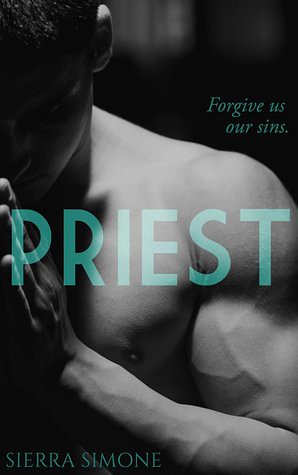 I've always been good at following rules.
Until she came.
My name is Tyler Anselm Bell. I'm twenty-nine years old. Six months ago, I broke my vow of celibacy on the altar of my own church, and God help me, I would do it again.
I am a priest and this is my confession.

***Priest is a standalone, full-length novel with an HEA.  For mature audiences only.***

Priest was an odd read for me. On the one hand it was really hot, which I loved! The author sure does know how to write some good sexy time scenes. Phew! But on the other hand the storyline just didn't work for me. I never believed Tyler was an actual priest. He didn't even really seem to have a relationship with God which was odd. I know a few times he would go on about it, or think about what God wants or whatever, but it never read as true. Like he was actually there for God. So I loved parts, but overall the story didn't work.

Tyler is a priest. I'm not really sure why he is a priest to be honest. Something about his sister and her history with a priest, but that makes no sense why that meant he had to become one. And can I just say that becoming a priest is not something people just suddenly decide overnight and the next day they are a priest? That it takes time to do so. That you have to be really devoted to go through everything and dedicate your life to God. I grew up Catholic. I was around many family friends who are priests and nuns and everything. Even though I am not religious now I know what they were like. Tyler didn't seem like any kind of priest I have ever encountered. Like I said before he just didn't really seem to be very religious which was odd. Plus immediately he wants to fuck Poppy. He kind of feels bad about it, but he doesn't come across as that conflicted. Sure at times he says he is, but I didn't believe it. It didn't feel like a real struggle and if he is so devoted to God and being celibate it should be. It should be a struggle. He should be conflicted. He supposedly found the calling, but not really? It just didn't work. If he would have been anyone but a priest this book would have been great. When the main plot point doesn't feel real, the "taboo" element of your story, the whole point of the book, then your story is just not going to be that good overall. I expected Tyler to be a priest and instead I got some guy pretending to be one.

Besides Tyler not acting/thinking/being like a believable priest I didn't understand Poppy either. She is a stripper at a high end club which is fine, but then she is very good at acting like she likes guys for money. I don't feel like I ever got to really see her as herself, only her as an actress. Even at the end I felt like I didn't know her at all. That her thing with Tyler was just an act. Like she knows what men want, knows what he wants, and plays the part for him. It didn't come across as this is who she is so it again didn't work. I didn't even believe that she really loved Tyler or even liked him, just that this is what she felt he wanted so she played the part. Why she needed to play the part for him I am not sure, but I don't feel like I ever really got to know her.

This story does have a lot of hot sex in it which I did really enjoy. Honestly my rating is mostly for the sexy time. If it would have had a good storyline to back it up this would have been a great read. The author can write, just not this story. When your main plot points don't feel believable then the story doesn't work overall.