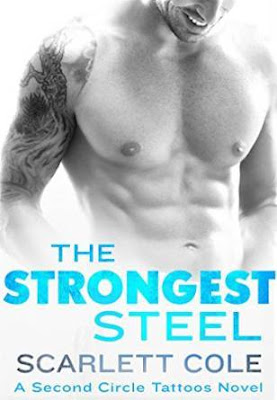 Harper Connelly never expected to find herself outside of a tattoo parlor at one in the morning, summoning the nerve to take back her past. She's determined to forget her old life and is looking for an artist who can tattoo over the scars on her back.

Trent Andrews, local legend and owner of the Second Circle tattoo studio, has his own reasons for specializing in inking over scars. And in spite of her mysterious past and the difficult road ahead, he quickly realizes that Harper is funny, smart, and--under her ridiculously oversized clothing and SPF 100 sunscreen--totally hot. He's happy to take on the challenge of designing a meaningful and deadly full-back tattoo for her.

But when cryptic messages start appearing on Harper's phone, strange deliveries arrive at her door, and Second Circle is vandalized, Harper is convinced that her ex-boyfriend has tracked her down, and worse, that he knows about Trent. Running was the only thing that saved her last time, but now that she's started to put down roots in Miami, she'll have to decide if she can finally fight back instead.

The Strongest Steel was exactly what I wanted to read when I picked it up. I didn't expect to enjoy it as much as I did. Harper and Trent were wonderful together.

Harper has a dark past. She has something that happened to her that left her with scars covering her back. A constant reminder of that terrible night she wishes never would have happened. She has a lot of fears, which is understandable after everything she went through, but at the same time she is determined to get her life back. To live. And step one is to get an awesome tattoo to cover her scars.

Trent is an awesome tattoo artist specializing in covering scars. When Harper comes into his shop there is something there, but when he sees everything she went through he knows he has to proceed gently. Even if nothing happens between them he wants to be there for her and help her through this. He has his own reason, but the more time he spends with her the more time he wants to. He was so incredibly sweet with Harper. I loved him so so much. He was kind and caring and understanding and just wonderful with everything she is going through. He really helps her whenever she needs it. Especially when it looks like her past is coming back to haunt her.

This was a great read. I loved Harper and Trent - they were so cute together!