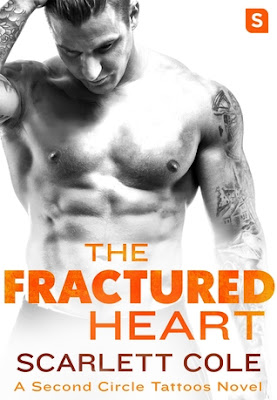 All things, when placed under pressure, eventually break or leave a mark.

Tattoo artist Brody "Cujo" Matthews knows how to keep things simple. In life and in love. Abandoned as a child by a mother who refused to stick around to raise three boys she didn't want, he's intent on staying clear of complicated women. The only things complicated in Cujo’s life are the killer tattoos he designs and inks. That all changes when he’s asked to help organize his best friend Trent's engagement party, which means working with Trent's fiancée's best friend, Drea, the definition of high maintenance and sizzling curves. And the one woman he doesn’t want to walk away from.

Andrea "Drea" Caron is broke and tired. After years of caring for her ailing mom, she's at the end of her rope trying to manage the piling medical bills, two jobs, and a life placed on hold. She certainly doesn’t need the added frustration of a sexy playboy tattoo artist messing up her best friend’s engagement party or her carefully balanced life. But when Drea witnesses the abduction of a woman from the café she works at, she can’t help but turn to Cujo who’s determined to prove to Drea that he’s someone she can count on forever…but as they attempt to bring the truth to light, someone is working to bring that forever to a sudden, deadly halt.

The Fractured Heart was a fun read. Drea and Cujo were wonderful together even if they try and fight it at first. It was fun.

Drea can come across as a bit uppity. She has had a lot on her plate and is trying to get by. She has to keep things nice and neat or they will get out of control. And she can't have that. And Brody is definitely on the can't have list. He is supposed to be helping her plan her bff's engagement party (her bff is marrying his bff), but he is not taking it as seriously as she thinks he should be. She wants some fancy affair when he thinks a more casual arrangement would suit the couple better. These two. Man. They can go at it. But it is great to watch.

With everything Drea has on her plate she doesn't need anything else. Until she accidentally witnesses a crime and then things get more complicated whether she wants them to or not. She doesn't really know what to do, but she does call the cops and get them involved. Only she can't help but try and solve the case herself as well. Through all of this Brody steps in to try and help protect her because...well he likes her. He wants to see if the two of them can make this work. These two.

I really enjoyed this fighting to lovers story. Both of them have a lot going on, but can they figure out how to be there for each other? Can they lean on each other when needed? Is this their match made in heaven? Brody was really sweet with Drea once he decided he wanted her in his life. He would do anything for her, but when things in his life get complicated it could mess this fragile bond up. After all he is not used to leaning on someone else and he still has some issues from when he was younger to work through.

It was fun watching these two figure everything out. From who committed the crime to what was going on with Brody it was a good read. Now on to the next one.