Keep Me Close (The Brothers Salem #1) by Elizabeth Cole 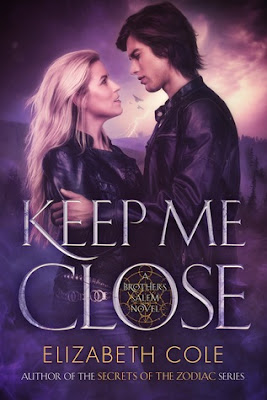 Hunt demons for thrills, then Netflix and chill.

Dominic Salem is many things: professional ghost hunter, curse breaker, and demon slayer to name a few. If there's one thing he's learned, it's never pick up hitchhikers. Something odd about this one made him stop. No doubt he'll regret it.

Lavinia "Vinny" Wake doesn't exactly trust her smoking hot ride, but her nightmares have her all messed up. The only thing she has faith in is her art. Life on her own is lonely, but at least no one can break her heart.

Dom can tell Vinny's nightmares aren't just dreams--they're way worse. Something or someone is drawing her into its trap. Turns out, though, Vinny's life isn't the only thing at stake. Her soul is on the line, too. No pressure.

The debut novel in The Brother Salem, a new contemporary paranormal romance series where a trio of demon hunters--armed with spells and snark--are on a mission to slay some demons, break some curses, and get their girls. Unless the girls get them first.

I was really excited to read Keep Me Close. I loved the prequel novella, One Touch of Silver. In fact that was what turned me on to this author. So I was excited to see where the story went. Only...it was a good read, but not as great as I was expecting.

Dom is a paranormal investigator. He travels the country getting rid of ghosts and demons and curses and anything else you might need. He lives with his brothers and they need to money. It is hard work, but he would do anything for his family.

Vinny used to have nightmares when she was younger, but then they went away. Only they started back up recently and her bff is in trouble. Her bff who lives on the other side of the country. Her bff who she had a fight with and is now super worried about. So she has to go check on her and make sure she is okay. Only Vinny doesn't really have any spare money so she is hitchhiking her way across the country. Yes, it can be a bit...dangerous. You can get picked up by some real creeps, but what else is she supposed to do?

When Vinny gets kicked out of the car by a super creep in the middle of nowhere she doesn't have much hope of getting another ride. Or to a town before she dies of thirst. When Dom drives by on his motorcycle she is not sure she wants to accept his ride, but what other choice does she have?

These two were cute together right from the start. Dom doesn't want anything from Vinny, he normally doesn't pick up people on the side of the road, but there was something about Vinny that made him stop for her. And Vinny is very skeptical, especially since her last ride didn't work out so well. She doesn't want to like Dom even if she starts to. They did have some chemistry between them, but they both have walls securely in place when they meet so it takes a while for them to get over those initial hurdles.

Dom and Vinny were sweet together, though when they start trying to figure out what is going on with her friend and how Vinny may be involved the story went downhill for me. I didn't understand Vinny and why she would lash out all the time. Really the both of them were quite ridiculous. I swear I read the last parts *spoiler alert* where they kind of break up because Dom says he needs to head home like a billion times. I still don't understand why Vinny was so upset and took that as Dom doesn't like her/doesn't want to be with her. It was odd. And didn't make a lot of sense to me. Really her behavior when she was at her friends house made no sense to me. So that dragged the story down a bit. Dom had his head scratching moments as well, but he was more okay overall.

So yeah, this book was a good read, but I found Vinny a bit confusing at times and as it went on her character made less sense to me. Oh well.