Blog Tour: A Little Too Late by Staci Hart 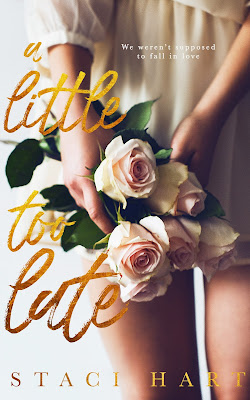 I wasn't supposed to fall in love with the nanny.

When my wife left, she took the illusion of happiness with her, and I've been caught in a free fall ever since. For nine long months, I've been fighting to figure out how to be a single dad, how to be alone.

When Hannah walked through the door, I took my first breath since I'd found myself on my own. She slipped into our lives effortlessly, showing me what I've been missing all these years. Because Hannah made me smile when I thought I'd packed the notion of happiness away with my wedding album.

She was only supposed to be the nanny, but she's so much more.

The day my wife left should have been the worst day of my life, but it wasn't. It was when Hannah walked away, taking my heart with her.

Gah! This story! I...I didn't want to put it down. When I first started reading this author I found her stories to be sweet and cute and wonderful. I loved them, but now? Oh my goodness. She really has a fantastic way of pulling at the heartstrings. Of making a story so sweet and wonderful, but emotional and ah I love it. I loved every minute of it.

A Little Too Late is the story of Hannah and Charlie. Hannah who is an au pair from the Netherlands. Her friend had been working in the US and finally convinced her to come over as well, but things didn't turn out the way she imagined. Hannah didn't have the best of times and she really was almost to the point of going home. She would have to if she didn't find a job. And she was very skeptical that things would work out. That she could trust someone again after everything she had been through. But then she met Charlie.

Charlie is a bit broken. Floundering in his life since his wife left. He has two small children and he doesn't know how to care for them. He wants to, but is afraid that he has messed up so much already he doesn't want to mess up more. Oh, Charlie was so sweet and kind and caring and if he would only believe in himself he would be able to see that he can do anything. But he is not there yet, at least not until Hannah comes into his life.

Charlie needed an au pair, Hannah needed a job. They both know nothing should happen between them. She is there to work and he is her employer, but these two. They both have some things in their past that are trying to catch up with them. I could see what would happen before it did, where the story was headed, but that didn't make it any less painful to watch. Hannah is so full of love. She is wonderful. Caring, kind, just one of the best people ever. But sometimes things don't work out the way you want to. Sometimes you don't have the time to fix everything before things fall apart. These two. I loved them. I loved this story. It was wonderful. 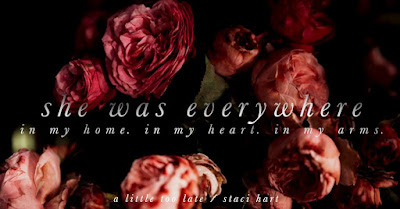 The next morning, I was up and in my office before anyone was awake, attacking my work with newfound enthusiasm and a plan in mind. Because I wanted to feel like I’d felt the night before in the kitchen again, and there was only one way to get that back.

I checked the clock around eleven that morning and closed my laptop, pushing away from my desk and heading up the stairs in search of my children.

When I rounded the corner into the kitchen, I found them sitting at the table with their lunches. And when they saw me, their smiles validated my grand plans with unwavering certainty.

“Hey, guys,” I said, smiling back as I walked over to them, ruffling Sammy’s hair when I passed him.

Maven’s mouth was full, so she just waved, and Hannah smiled at me from the island where she was setting up a spread for sandwiches.

I snagged a grape off Maven’s plate and popped it into my mouth. She handed me another, which I accepted.

“’Fraid not, bud. But I thought I’d come have lunch with you. Is that okay?”

“Psh, obviously. And I thought we could play for a little bit before I have to get back to work. What do you say?”

He nodded, grinning. “We can play trucks! You be the bulldozer and I’ll be the tractor and Maven can be the monster truck and Hannah can be the ambulance because she helps people.”

“Perfect,” I said on a chuckle.

A burst of color caught my eye. A vase on the windowsill behind the table held a spray of red and orange tulips.

“Those are beautiful,” I said, gesturing to them. “Where did they come from?”

“Oh, I picked them up this morning,” Hannah said with that ever-present smile.

“Always a little. But I love having fresh flowers in the house, something bright and delicate and alive. Well, maybe not alive anymore, but it feels alive, doesn’t it?”

“Can I make you a sandwich?” Hannah asked.

“Nah, I think I can manage, thanks. How’s it going this morning?”

“It’s good. We went to the park this morning.”

“I rode my bike!” Sammy crowed.

“Did you? No bumps or scrapes?”

“I’m impressed. Maybe next time I can come too,” I said, hoping it was something I could deliver as I reached into the bread bag for a stack.

Hannah turned to the cupboard, returning with a plate for me.

She was still smiling, standing at my side, assembling her sandwich. It was so mundane, something completely and utterly boring, but like the weirdo that I was, I found myself watching her hands as she folded cold cuts. We worked around each other—not that it was complicated, but there was a sort of rhythm between us, a natural pace wherein I used what she wasn’t and finished just as she needed what I had. I wasn’t sure why I noticed it, but I did, and I appreciated the simple synchronicity of the moment, a breath where things were easy.

I passed her the mustard as she handed me the ham. “So, I was thinking …” I paused.

“Oh, were you?” She glanced over at me with a hint of mirth at the corners of her lips.

“I know. I almost sprained something.”

“If it’s okay, I think I’d like to try to handle bedtime tonight.”

“Of course it’s okay; they’re your children.” That time, her laughter was sweet.

She shifted to face me, her eyes full of encouragement.

“Would you mind … helping me?”

Hannah nodded, her smile opening up. “That’s what I’m here for. Just let me know what you’d like me to do.”

I smiled back. “I’m sorry. I know it sounds stupid. I just … I haven’t done this much on my own, but I’d like to start.”

Her eyes softened, caught by slanting light, lighting up with sunshine. “There’s nothing to be afraid of,” she said simply.

“There’s no right or wrong, and they don’t care about anything other than you being there. It’s simple enough; you only have to try.”

“Is it really that easy?”

“It really is. You’ll see.” She reached for my arm and gave it a squeeze that wasn’t meant to be anything but friendly but held something more, something in the pressure in her fingertips and the depths of her eyes.

It was something I did my very best to ignore. But I felt the heat of those fingertips long after they were gone, even as we sat across the table from each other eating lunch, the tulips in the vase behind her bowing their long heads as the sunlight illuminated them, exposing what was hidden within their petals.

Staci has been a lot of things up to this point in her life -- a graphic designer, an entrepreneur, a seamstress, a clothing and handbag designer, a waitress. Can't forget that. She's also been a mom, with three little girls who are sure to grow up to break a number of hearts. She's been a wife, though she's certainly not the cleanest, or the best cook. She's also super, duper fun at a party, especially if she's been drinking whiskey. From roots in Houston to a seven year stint in Southern California, Staci and her family ended up settling somewhere in between and equally north, in Denver. They are new enough that snow is still magical. When she's not writing, she's reading, sleeping, gaming, or designing graphics.
Connect with Staci: