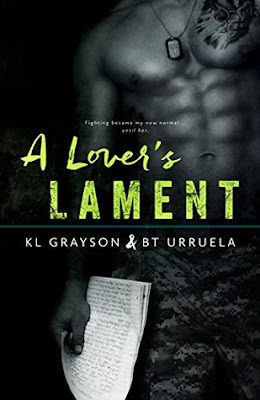 In a matter of seconds my entire world changed, and it was in that moment that I stopped living and simply began to exist.

In my grief, I sent a letter to the first boy I ever loved. I hoped in writing it I’d find some peace from the nightmare I was living, some solace in my anger.

I didn’t expect him to write back. I wasn’t prepared for his words, and I certainly wasn’t ready for the impact this soldier would have on my life. A deep-rooted hate transformed into friendship, and then molded into a love like I’d never known before.

Sergeant Devin Ulysses Clay did what I couldn’t: he put the shattered pieces of my heart back together, restoring my faith in humanity and teaching me how to live again.

But now that I’m whole, I have a decision to make. Do I return to my life as I knew it and the fiancé I left behind, or do I walk away from it all for the only man to ever break my heart?

I’ve been living in hell, but you won’t hear me complain.

These men depend on me, as I do them, and this brotherhood is the only family I’ve ever known.

The Army saved me from a callous mother and a life on the wrong side of the tracks that was quickly spiraling out of control. So unlike most of the men in my platoon, going home wasn’t something I longed for.

I was content overseas, spending my days defending this country that gave me my life back. Fighting became my new normal … until her.

A letter from Katie Devora—a letter that I almost didn’t open. Her words put a fire back inside of me that I didn’t know I’d lost. She gave me hope during a time when I was fighting every day just to stay alive, and now it’s time I fight for her.

A Lover's Lament was a meh book for me. I didn't hate it, but there wasn't anything about it I really enjoyed either. The writing, the characters, the story it was all just meh.

Katie was heartbroken when Devin left her years ago. They were in love and then he left without looking back. She has moved on, or tried to, but when she is in an accident, one that kills her dad, and is having a hard time with things her therapist suggest she writes to a soldier. Tell them what she is thinking as a way to get it out of her head. Okay, I get it, Devin is a soldier and left her to be one, but to suggest she write an angry letter to a random soldier? Really? Why do they deserve that? Luckily Devin is on the list and so she writes to him, not some random guy, but still. Now...Katie is seeing someone, but she suddenly realizes she doesn't love this dude (poor guy) and yeah. Drama rama.

Devin always loved Katie, but kept away from her for her own good. But when he receives her letter things change. He realizes he can't stay away. So then suddenly he is home and they work things out and yey! Happily ever after. Until something happens to mess it up, but then again yey! Happily ever after. It was...way too quick. Katie goes from I am not going to think about this/I am not going to forgive Devin to happily ever after in two seconds. I didn't buy it. That and she acted like she was two for most of the story. Ugh.

The main problem with the book was I didn't connect to either of the characters, didn't see the connection between them, so it didn't work for me. I don't know why these two are together or why they love each other. It was just...not good. Some of the scenes didn't make much sense (why in the world would she be okay with giving Devin a blow job and having him drive recklessly when she is still not over the fact that a drunk driver killer her dad while she was in the car? Makes no sense!!), there were a lot of eye-roll moments, it just wasn't very good for me. Not the worst thing I have read, but definitely won't be reading more from these authors.