Need You for Always (Heroes of St. Helena #2) by Marina Adair 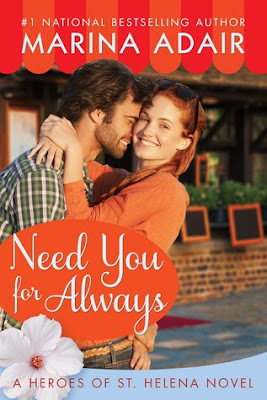 Emerson “Emi” Blake dropped out of culinary school to care for her ailing mother, but she has bigger dreams than running St. Helena’s most popular pita cart. First on the menu: upgrade to a gourmet food truck. A new part-time job as a personal chef will definitely provide the funds, but it also forces her into close contact with her one and only one-night stand, Dax Baudouin, who’s daring her to try a second taste.

Former army Ranger Dax has a clear mission: come home, get healed, and get gone. Yet Emi’s tough-girl exterior and hidden soft side are even harder to resist than her mouthwatering baklava. After years of battles, he knows better than to try to rescue anyone—not that she’ll let him get close enough to try. Truth is, Dax is starting to think that Emi’s the one person who can save him…if he can just persuade her to give him another shot.

Need You for Always was a cute read. Dax and Emi are perfect together and it was just what I wanted to read.

Emi has a lot on her plate. Since her mother passed away she has been taking care of her dad and little sister. She has big dreams, she is trying to start her culinary career, but she needs a bit more cash before she can really get started. She volunteers with her sisters Ladybug troop, she has her food cart, she is helping her dad find a job, she doesn't have time for much else. She is spread pretty thin.

Dax is recently back in St. Helena after a war injury sidelined him. He fully intends to heal then move on, though the more time he spends around Emi the more he is realizing maybe this is home after all. They had spent one night together, Emi knew it would be just one night, but Dax wants more. He wants another night but she won't give him the time of day. So what is he to do? Hire her to make his meals for him. He is injured after all. And maybe help get him to and from physical therapy. Maybe spending a bit of time with her will get her to open up to the possibility of them.

These two were so cute together. I loved their back and forth and it was a fun read. Dax helping with the Ladybugs was adorable! The way he was with Emi's sister was so sweet. He is a great guy and Emi deserves someone like him after all she has been through. With all the stress she handles on her own. It was fun watching these two figure everything out.