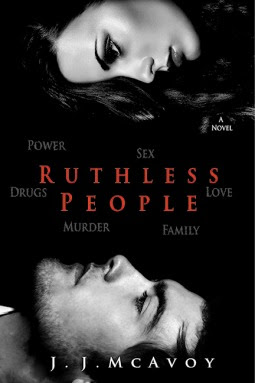 To the outside world, they look like American Royalty, giving to charities, feeding the homeless, rebuilding the city. But behind closed doors is a constant battle for dominance between two Bosses, cultures, and hearts.

Ruthless People is a romantic crime fiction set in modern day Chicago, following the life and marriage of Melody Nicci Giovanni and Liam Callahan—rivals by blood and leaders through fear. Their marriage was arranged by their fathers in hopes to end years of bloodshed between the Irish and the Italians.

Liam, next in line to lead the Irish, believes he’s getting a simple-minded wife, one he can control, one who bends to his every need . . . the complete opposite of Melody. Bred to be a Boss, a world-class marksman, master of disguise, with no mercy and no fear. Twenty-four years later, she has achieved more than any man could even dream of, killing anyone who steps in her way. She knows exactly what type of man Liam is, and she would rather die than give up the power she has spent her whole life building. But with no other family left, she must not only learn to work with Liam, but the whole Callahan clan.

The Mafia of the past is evolving, and with rival bosses gunning for them, Melody and Liam will have to figure out how to work as one to take down those who stand in their way, all while keeping up appearances.

Power, Family, and Respect are everything.

Warning: This book contains adult language and subject matter including graphic violence and explict sex that may be disturbing for some readers. This book is not intended for readers under the age of 18.

I enjoyed Ruthless People so much more than I thought I would. I loved both Liam and Melody and the two of them together? Watch out. You don't want to mess with them.

After reading the synopsis I thought this book would be about Liam not able to deal with how awesome Melody is and struggling to figure out how to make this marriage for an alliance work. Only that isn't what happened. These two might have married to align their families, but they quickly grow to care for each other. Liam thought he wanted a docile little wife who would go shopping and stay out of his way, but what he got was so much better. He got a true partner, someone who is just as ruthless as he is. Someone who, together, can take down anyone who gets in their way.

It was a lot of fun watching these two struggle for dominance at the beginning. Like I said Liam thought he was getting a docile wife, but really he got so much more. There is definitely a power struggle between the two of them and oh, it was fun. Neither wants to be weaker than the other, but eventually they realize that they can be even stronger together. They care for each other and I loved it.

This story is just the first chapter in the story of Liam and Melody and man I cannot wait to read more. I know it will be amazing, I know they will take down any threat against them, but I know it will probably not be easy. It will be so much fun!!