This Is Our Song (Shaughnessy Brothers #4) by Samantha Chase 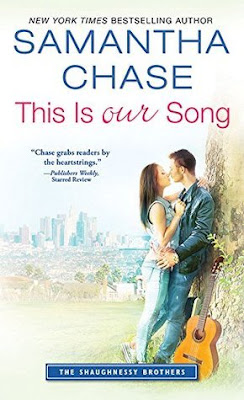 She knows him by reputation
Riley Shaughnessy knew that to stand out in his large family, he'd have to go big. Making a name for himself as a musician wasn't easy, but he followed his dreams to rock-star success. But the relentless expectations of fans is not helping the slump he's in now. So of course the person who attracts him is the woman who is not impressed by fame.

Which gives Riley Shaughnessy a lot to prove
Entertainment reporter Savannah Daly is completely unfazed by pretty-boy rock stars. She's just here to get her interview and write her story. But spending an entire month with the Shaughnessys is going to show Savannah a side of Riley she never could have guessed.

This Is Our Song was a really cute read. I loved watching Riley and Savannah figure things out. Oh, they were wonderful.

Savannah is an entertainment reporter. She is set to write a big story, but gets pulled off that to interview Riley Shaughnessy, something she is not happy about. She doesn't really know Riley, but she knows people like him. She figured he is just some spoiled rich boy who sings. So needless to say she does not want to spend a month really getting to know him.

Riley is amazing. Yes, he is a rock star, but he doesn't let that get to his head. Or he didn't. He has money, but he does not spend it all willy nilly. He has been trying to write a solo album now for a while and the record label is getting frustrated that he is not finished yet. He was doing so well, but then something happened that made the music go away. He starts questioning himself and if he can even do this and that makes him angry. He just doesn't know how to get the music back.

When Savannah and Riley meet it was so cute/hilarious. Riley definitely wasn't in a good mood and Savannah is not at all happy with him. He doesn't know that she is the reporter that will be interviewing him, but once he talks to her he likes her. He wants to get to know her, only how can that happen when she has a job to do?

These two were so much fun to read. Riley is such a great guy. I normally don't like rock star romances, but Riley is just like a normal guy who happens to be a rock star. He loves his family, he would do anything for them. He is wonderful. And Savannah is just as great. She quickly starts to see that the idea she had of who Riley is was all wrong. That he is not that guy. That he is actually pretty incredible, but she can't let him get too close because that could taint her story.

Oh, these two have a lot of obstacles in their way, but they somehow manage to figure it out. Riley can be a bit sensitive at times, but I still loved him. This was a really great read. I love these Shaughnessy Brothers books. Really I just love the Shaughnessy's. They are a wonderful family and wonderful characters.