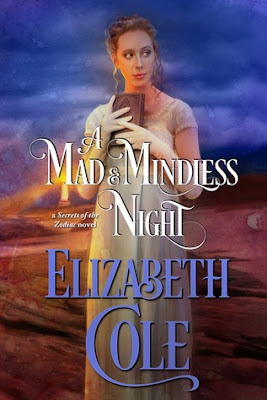 A rogue in search of a new life, a brilliant woman betrayed, and one path through a prison of lies…

Ashley Allander has been a rake, rogue, scandalmaker, and heartbreaker. Now, with one last chance to redeem his name, he becomes a spy. The Zodiac’s newest recruit leaves London behind to find an elusive inventor, but his target proves far stranger. Ash discovers an aloof host, bright lights in the sky, and a woman who is either an innocent prisoner…or completely mad.

Elanora Morrison is desperate. Her life’s work has been stolen from her. She’s been declared insane and kept far from anyone who might help. She gambles everything on a mysterious newcomer, risking her reputation, her life, and her heart to regain her freedom.

Together, Ash and Nora hold the key to a conspiracy between two warring nations. In the midst of danger, they find an improbable love, and the chance for a new future…if they live long enough to reach it.

The sixth novel in the Secrets of the Zodiac, a series of full-length historical romances: Featuring sexy storylines, complex characters, and international intrigue, set against the backdrop of the Napoleonic Wars.

A Mad and Mindless Night was such a fun read! I haven't read all the books in this series yet, but that wasn't a problem. This book can be read as a standalone and you won't feel like you are missing out on things.

Elanora is living in a nightmare. Locked away from anyone and everyone who could help her she has to find a way to escape. She just has to! Only it is not that easy. Every time she has tried before she has been thwarted. What is she to do? When a mysterious new guy shows up can she trust him? Or will he think she is crazy as well?

Ashley has a bit of a checkered past. He is the second son so he had a quiet plan for his life until everything gets waylaid. He is now known as a ladies man. As someone who will ruin your reputation. As a bit of a rake. I loved Ash. I loved how kind and sweet and caring he was. I loved how he would help out someone just because they needed help. He didn't need it acknowledged or anything, he would  just do the right thing because that is who he is. Which is a bit of a contradiction to what everyone else sees him as. When he finds Nora hidden away in he knows his simple mission, his simple favor to his brother, will be a lot more than he was expecting. He can't leave until he figures out what is going on and how to help Nora.

These two were great together. As I said I just loved Ash. He was incredible! I really felt bad for him at times because he is such a genuinely wonderful person. I really enjoyed this story. Ash and Nora trying to figure out what is going on and how to get Nora out of the mess she finds herself in was so much fun!!

Now I will say there were a few things that bugged me slightly. Nothing major, not enough for me to not enjoy the story or recommend it, but I should mention them. One is that Nora is a bit...judgmental at times and listens to what others say about people instead of what she knows. Knowing all that she has been through, all that she has endured, you would think she would be a bit more open to hearing people out and trusting them rather than gossip. The other is there were some strange things going on and the characters never thought that one of the characters might be involved. Even when they find out strange information about them they still don't think they could have anything to do with anything. I could see it at first, but, eventually, it seemed a bit ridiculous to not even consider the option.

Overall this was a great read. There were a couple of things I didn't like as much, but they didn't keep me from loving this book. If you haven't read this author before you should really check her out. If you have then this is another great read.