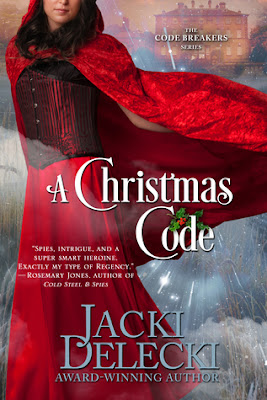 Lady Gwyneth Beaumont has long awaited the opportunity to show Viscount James Ashworth that she is no longer the impetuous child who dogged his footsteps. Now a much sought-after debutante, she is determined to prove to the hard-headed rake that she is a grown woman and a worthy participant in both the spy game and the game of love.

Ash, recently returned from three years undercover in France in His Majesty’s service, wants nothing more than to complete his final mission and retire to his bucolic country estate. However, what seemed a simple assignment to protect the Prince Regent at a Christmas party turns into a maze of intrigue, desire, and treachery.

Adding to the perilous secret operation is one problem Ash never anticipated: The appearance of the reckless, enticing Gwyneth, who has blossomed into a gorgeous woman and self-appointed spy. When a snooping Gwyneth uncovers a shocking secret, she puts herself in mortal danger.

Can Ash protect Gwyneth and the Prince from French assailants and, at the same time, win the passionate lady's heart?

Can Ash and Gwyneth both triumph as winners in the game of spies and love?

I love old timey romances and I love holiday reads so an old timey holiday read is the best! A Christmas Code had all of the old timey fun I love as well as some Christmas magic to make it that much better. This is the first I have read from this author, but I am going to check out more of their work as this was a lot of fun to read.

Gwyneth has always had a huge crush on Ash. They grew up together, but Gwyneth wants to show him that she is not that little girl anymore. That they are meant for each other. Every single guy seems to want her attention, but she only wants Ash. Ash who is a spy. Ash who doesn't want Gwyneth anywhere near the dangerous missions he is on. Ash who wants to keep her safe.

Ash was definitely protective of Gwyneth. He knows she is smart and capable, but he doesn't know what he will do if she would get hurt because of him. She was so fun. She wants to be a part of Ash's life and wants to help with his spy work. She notices a lot, no one would suspect her, she could be good at it if she learns what to do. When these two get mixed up in an assassination attempt things get a little tricky. Luckily they are both there for the other and with a bit of Christmas magic maybe everything will work out the way they both want.

I really enjoyed this read. I love the spies, I love Gwyneth and Ash, I loved everything about it. It was just a really fun holiday adventure.