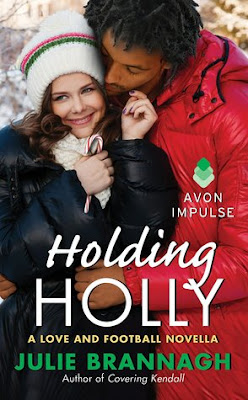 Holly Reynolds has a secret. Make that two. The first involves upholding her grandmother’s hobby of answering Dear Santa letters from dozens of local schoolchildren. The second ... well, he just came strolling in the door.

For the last two years, Holly has not been able to stop thinking about gorgeous Seattle Shark Derrick Collins. His on-field exploits induce nightmares in quarterbacks across the NFL, but she knows he has a heart of gold.

Derrick has never known a woman he wanted to bring home to meet his family, mostly because he keeps picking the wrong ones—until he runs into sweet, shy Holly Reynolds. Different from anyone he’s ever known, Derrick realizes she might just be everything he needs.

When he discovers her holiday letter writing, he is determined to play Santa too. And as the pair team up to bring joy to one little boy very much in need, they discover the most precious Christmas gift of all: love.

Holding Holly was a lackluster holiday read. I expected a cute, fun read where the two main characters come together with the help of some holiday magic and yeah. It was just...missing...missing that fun holiday thing I love so much.

Holly is working in Noel for the holidays and helping her grandmother write return letter from Santa. She finds one where the kid sounds like his circumstances are not very good and she wants to try and help him out. Only she doesn't know how to find him or his family. She also has had a crush on Derrick forever, but she is so shy and quiet she has never really talked to him.

Derrick is a NFL player and he and his family go to Noel one day during the holiday season. When he goes to find some coffee he meets Holly. Holly who he has seen around and always thought was cute. Holly who he wants to get to know better now that he has had a chance to talk to her.

The two of them...I don't know. I don't really know why I didn't enjoy this story. I think the way it was written just didn't jive with me. That is the technical term I believe. Yeah. It was...I didn't see the two of them liking each other let alone falling in love. Plus I didn't understand why the letters were sooooo secret. I get not wanting people to know, but if this guy is going to be your boyfriend and wants to help why is that a problem? I don't know. I didn't understand Holly and her anger at stupid things. It was just like everything didn't work for me. I am usually more forgiving with holiday reads, but I couldn't get into this one. It seemed to suddenly end with they lived happily ever after.