Just in Time for Christmas (Lowcountry Lovers #4) by Kim Boykin 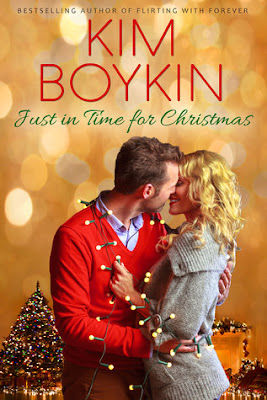 Nobody does Christmas like Miranda Hamilton, and now that she finally has her chance to chair Magnolia Bay's tree lighting and the cotillion, which benefits her late mother’s breast cancer foundation, this Christmas is shaping up to be the best ever. That is until her childhood nemesis Logan Mauldin buys his way on her committee and starts making plans of his own.

Logan Mauldin loves to get under Miranda's very sexy skin, and it's only fair. She's been getting under his since long before their first kiss at 13. Logan’s the last man interested in co-chairing a Christmas committee or participating in a sexy bachelor auction, but since that night he interrupted Miranda on a date and cornered her under the mistletoe, he can't stop thinking about her. Or vying for her attention and bugging the hell out of her.

Christmas cheer isn’t the only thing that heats up between the Miranda and Logan, but, thanks to a lie that is as much her fault as it is his, he loses the woman he’s loved since forever. Logan will need a Christmas miracle for Miranda to forgive him. A grand gesture to melt her heart and win her back just in time for Christmas.

Just in Time for Christmas was a fun, quick holiday read. I really enjoy the enemies to loves thing. Well as long as it is not abusive enemies. When it is like this story I really enjoy it. When the two main characters just fight a lot, but not in a mean, hurtful way. More bickering and stuff and everyone knows they really like each other, but it takes them a while to figure it out. It is fun.

Logan and Miranda grew up together. They have never gotten along. Logan always tried his best to get under her skin and rile her up. He still does, but something has changed for him. He now realizes there might be a bit more there between them. Maybe he will have to fight to see if they could really be something more.

Miranda doesn't trust Logan. He is always there annoying her and she doesn't want to deal with it. When he buys his way onto the committee for the holiday celebration that Miranda is organizing she is not happy. This is the first year she is in charge and she needs everything to run perfectly. She can't have Logan messing that up. Only he is there to help and to try to prove to Miranda that they are good together. That they could be happy. And he does help. But she hates him right?

I really enjoyed this read. I loved watching Logan try and worm his way into Miranda's life, but also the back and forth between them. It was a fun, cute holiday read.