Splinters of Light by Rachael Herron 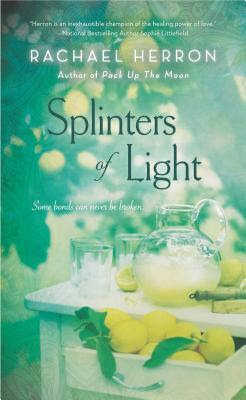 
From the acclaimed author of Pack Up the Moon comes a poignant and beautiful novel about love, loss, and the unbreakable bonds of family—particularly those between mothers, daughters, and sisters.

Ten years ago, Nora Glass started writing essays about being a single mother of a six-year-old daughter. Her weekly column made her a household name, and over the years, her fans have watched Ellie grow from a toddler to a teenager.

But now Nora is facing a problem that can’t be overcome. Diagnosed with a devastating disease that will eventually take away who she is, she is scared for herself, but even more frightened about what this will mean for her sixteen-year-old daughter.

Now Nora has no choice but to let go of her hard-won image as a competent, self-assured woman, and turn to the one person who has always relied on her: her twin sister, Mariana. Nora and Mariana couldn’t be more different from one another, and they’ve always had a complicated relationship. But now the two sisters will have to summon the strength to help them all get through a future none of them could have ever imagined, while uncovering the joy and beauty that was always underneath.

Why have a waited so long to read this book? I have had it sitting on my Kindle for two years now and all this time I didn't know what I was missing out on. Rachael Herron is a fantastic author and she writes such beautiful stories. I might not always like the characters, but I love her stories regardless. Simply wonderful.

Splinters of Light is the story of the Glass woman, or more accurately the story of Nora Glass and how what happens to her affects the other women. Nora is Ellie's mom and Mariana's twin sister. Ellie who is just on the cusp of adulthood, but still so young. She is sixteen when the story opens and acts like a typical teenager. She is moody and her mom is not cool anymore. She plays video games a lot, but she doesn't want her mom to know how much she loves the one she got for her. Throughout the story she deals with that awkward first love, the insecurities that come along with it, the pressure to choose a college and what you want to do with your life. I feel like I knew Ellie. Like she was from my real life. That age...man. She goes from only having the typical teenage things to worry about to having so much placed on her shoulders. My heart really broke for her and often. She feels so alone, especially since her mom and aunt are twins. They always have someone, but who does she have? This girl. You really see her grow up throughout the story. You see her deal with so much, but she is strong.

Then there is Mariana the mess up. Everything she does seems to turn out wrong. She was an interesting one. I didn't always understand why she did things or the way she acted, so I don't completely understand it, but you can't help but root for her. To want things to work out just this once. For her to finally have something she can say is a success.

And Nora. Oh Nora. She feels like she is the glue that holds everything together. Without her what will everyone do? She has been writing a column for the newspaper for the past years and everything she does is for Ellie. Her husband left them both when Ellie was little, but Nora got by. She started writing about her experiences getting divorced and raising a small child, with tips and tricks for her readers. She even has a book out about life with Ellie. She was interesting to read because there were a lot of times when she wouldn't want Ellie to do or experience something because Nora knew that she wouldn't enjoy it, only to find that Ellie did like it. It was Nora that didn't enjoy whatever it was. She has this way of thinking that the other Glass woman are the same as her. That they would like the same things, be afraid of the same things, react the same way to things. But it is simply not true. They each deal with things in their own way.

There is a really beautiful/heartbreaking scene towards the end of the book where Mariana and Nora get into a big fight. Understandably, but they both let out what they really think and never said. It was this beautifully terrible scene where I just thought yes to all of this. Yes to Mariana finally letting Nora know how she saw everything. How everything is. How Nora is not the center of the world. How they can stand on their own without her if need be. That scene stuck out so much to me partly because it really explained Nora in a way I hadn't noticed before, but afterwards it was so obvious.

Overall this is a fantastic read. Nora gets some bad news when she goes to the doctors and to watch what happens with her and how it affects the others...it was simply heartbreaking. I couldn't help but put myself in Ellie's place. What would I have done at her age? What would I do now? It was a beautiful, heartbreaking read of growing older and how the inevitable sometimes comes a little too soon.  The story was amazing, the writing magnificent. Go read this story. Even if it doesn't sound like your thing try it out. These characters will get under your skin and stay there. It is hard to read at times, but so worth it.