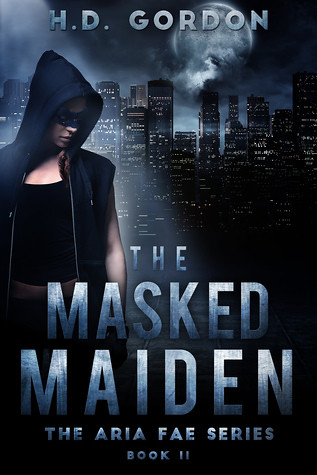 
HERO OR VILLAIN? YOU DECIDE.

When she decided to become a vigilante, no one told 17-year-old Aria Fae about the possibility of public backlash, or the attention the media would garner by dubbing her The Masked Maiden of Grant City.

On top of this added heat, a rogue supernatural known as The Scarecrow has escaped his prison, and his history with Aria makes her the crazed warlock’s obvious target.

Now, she must face her past and defeat The Scarecrow once and for all, or die trying.

When things reach their worst, will The Masked Maiden be the hero Grant City needs, or the villain they’ve made her out to be?

The Masked Maiden was a fun second chapter in the Aria Fae Series. If you like superhero stories than this is a series for you. Note: This is a continuation of the same story from The Halfling, book one in the series.

Area Fae is a vigilante. She roams the streets of Grant City, with the help of her friends, trying to stop crime. She is doing good, helping people, but not everyone sees it that way. She is starting to see some public backlash from the good deeds she has done. Some people are saying she is a menace and should be stopped. And she doesn't really know what to do with that. She always thought she was doing good, so why are people not happy?

Add to that an escaped warlock who is out to get her and things are not so good for our Aria Fae. She has a lot on her plate as it is, but right from the start things keep piling up. Her crush and old partner from the Peace Brokers comes back and offers her what she thought she always wanted - him and a chance to go back to her old life. If he would have shown up before she got settled there would be no question that she would go back, but now can she really leave? Can she go back to the people who kicked her out not that long ago? Or will she stay and help protect Grant City and the people she has grown to care about there?

I really enjoy these Aria Fae books. She is fun to read and such a selfless person most of the time. Once she hears someone in trouble she has to go help even if it means putting herself in grave danger. She is conflicted at times about what to do, but she is also really young. She is only seventeen and you can see that. Not always, but as the stories go I hope we get to see her grow and become stronger. You get to see a bit of that in this book, facing her past and trying to move forward with her life. These are just fun reads.

Now there is one thing that did bug me about this story and that was all of the guys who like Aria and how she treats them. It seems guys cannot help but want to be with her, which is fine, but Aria just makes out with and uses whoever is around at the time. She never thinks like maybe I shouldn't make out with this other guy since I was just kissing a different guy yesterday and telling him how much I liked being around him. It was a bit frustrating as she had no consideration for them, for what they might think or feel if they find out she is doing whatever with everyone. She didn't know at all what she wanted (even though it is a bit obvious she feels more for some than others, or what she should do in a situation) and could be a bit whiny about it. Hopefully as the books progress she can at least take others feelings into consideration. A small thing in the grand scheme, but bugged me none the less.

Overall this was a good read. Fun and exciting and I can't wait for the next installment.