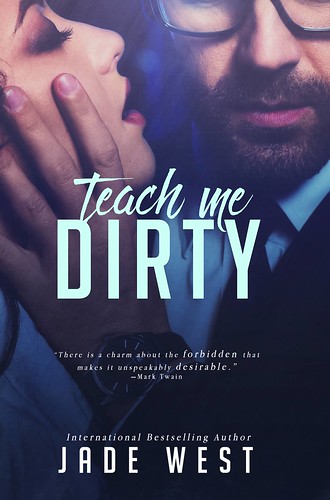 Because what would I know, right?
I haven’t even finished school. I’m just a silly little girl.

But they’re wrong.
I really do love Mr Roberts.

Phew! Jade West really know how to write one hot, sweet, sexy, amazing book. I am really glad I found her books as they are now some of my all time favorites. Definitely the best in the genre that I have read. She creates such wonderful characters who have such hot sexy times, but it is not just that. There is a really great story that goes along with it which you don't always get with super hot reads. You get a bit of everything with her books and I am left wanting more.

Teach Me Dirty was an amazing read. Mark and Helen are not the usual couple. Really I should have not enjoyed this story as much as I did. The age difference would usually get to me, but with this story I couldn't help but want these two to figure everything out and get a happily ever after. I just loved it.

Mark Roberts is an art teacher. He loves his job, loves where he is, but is not fully living. He has given up on his dreams, since they seem to have died for him, but he is not content to let others do the same. He tries to teach, to lead, to really get his students into art. Not all of them care or really pay attention, but he loves it. He is also really good looking so the girls have crushes on him and whatnot. No big deal, he can handle it, until he can't.

Helen Palmer is an artist. She is 18 and still in school. Still has Mr. Roberts as a teacher and she doesn't want that to ever change. She has been in love with him for as long as she has known him. Since she was twelve. Much too young to really be able to tell that you would think, but reading her, seeing how she thinks and feels about things, I believed it. I believe she knew at such a young age that their two souls were meant to be together. That he was it for her and she could be it for him if only she could get him to see her that way. If only he loved her too.

Mr. Roberts for his part tried really hard to not go into an inappropriate place. Even though she is legal and he wouldn't go to jail or anything, he would still lose his career over something like this. Only Helen is too much. Too sweet and innocent. Too kind and caring. Too loving. Too wonderful. Too much for him to stay away from. When the walls between them start crumbling it was painful to read, but also wonderful to watch. Both of them keep trying to do the right thing, but also try to be happy.

Helen does read as a young lady. She definitely felt like a teenager where Mr. Roberts did not. As I said usually that wouldn't work for me, but these two just did. The way they were written it was like they were meant to be. Helen helped Mr. Roberts live again. Helped him be happy again when he thought that wasn't possible. Helped him in so many ways, and he her. She has loved him for so long, and now, finally, she can be with him. Only in secret because of the nature of their relationship.

This story was full of ups and downs. Moments when my heart broke for them as they are in a tough situation. I am sure most people on the outside would judge them harshly, but reading them you can't help but feel it is just right. And boy oh boy were they hot together! Really Helen and her sketchbook in the beginning...yeah. She has a great imagination that I wish I could have seen more of in her real life. It was...yeah. They just work. I loved this story. It was better than I could have hoped and it makes me want to read more by this author. Do yourself a favor and give this story a read.