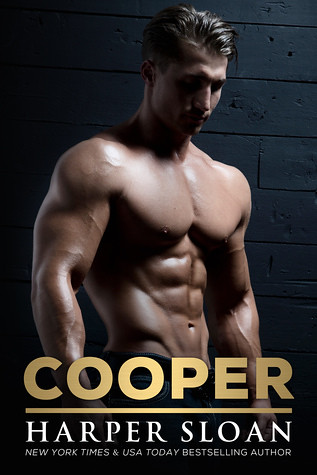 
Do you take me seriously? Because I don’t. I use my jokes and easygoing personality to hide the pain I’ve felt since he took his last breath. I’m adrift without my partner in crime, my best friend…my brother. I can taste the vengeance just within my grasp.

Until she barges into my life. Promising me happiness and a peace I’ve been craving for years. She is the sun to my darkness, the happy to my despair.

But she holds secrets. Just like I do. She holds hers close, where I just pray mine don’t rock the walls we’re trying to build.

Now I’m stuck at a crossroads between my desire for revenge and my craving for her and the life we could have together—and I have no idea which road I should travel.

All I know with crystal clear certainty is that the past has the power to destroy it all.

No cliffhanger. This book is not suitable for younger readers. There is strong language, adult situations, and some violence.

Cooper was my favorite in this series thus far. Just a note - while you don't have to read these books in order there may be some plot spoilers for the prior books if you just jump right into this one. So slight plot line spoilers ahead for the first three books ahead.

When I first saw Cooper as one of the books in the series I just figured it would be the Cooper I had already met and was interested in reading his story. Only after everything that happened at the end of Beck obviously that couldn't happen. So I was excited to get to know Ash and know Chelcie a little better.

Man Ash is not in a good place when this book opens. I understand, but man. He is just drinking his way into oblivion and hooking up with random ladies all the time. He doesn't even remember them the next day or the things his says and does while drunk. He is definitely not a happy drunk.

Chelcie is trying to hold it together as well. She has some secrets, some things the rest of the friend family doesn't know, but the worst is how she feels about Ash. From the first moment she sees him there is just something there. She likes him, really likes him, but once he finds out everything he probably won't want to be with her. That and he would have to be sober long enough to actually have a conversation. They have been creating a fragile friendship in his sober moments, but it is not really stable.

When Chelcie knocks on his door one night when he is really wasted he says some things that he definitely doesn't mean and doesn't remember. They hurt her and she tries to keep her distance. Only then Ash sobers up, decides he needs to stop drowning his sorrows, and that Chelcie is his. He is going to stop fighting the draw she has on him and they are going to be together. Oh if only it were that easy.

Now after Beck when I realized what this story would be, what Chelcie's secret is, who Ash is, everything, I wasn't that excited about it. I just didn't think it would my favorite, but it was great. I really liked both of the main characters and loved reading their story. Chelcie is so great with Ash, so helpful and strong and there for him no matter what. Asher wants revenge, but can he do that without sacrificing everything? Oh it was such a great read. I really enjoyed this book.