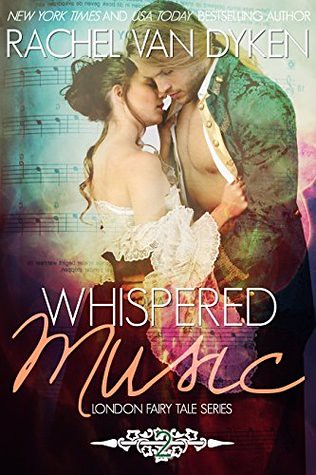 
Scarred at a young age, Dominique Maksylov, Royal Prince of Russia, has lived a reclusive life. As a musical prodigy, his music has wide reach into the world, but few ever see his face. He never ventures into polite society, but when he dis-covers he is the only heir to the Earldom of Harriss, he goes to one ball. And that one ball, was enough to change the direction of his life forever.
But how could he possibly have known that other person— the other half of his whole—would not only need his help but threaten his very existence?

She didn’t know how hard it would be to love the broken.
Isabelle Hartwell’s mother just sold her to the Beast of Russia. He’s mean, tem-peramental, and the most virile, handsome man she has ever encountered. But he has a secret, one he’s willing to die for and he refuses to let anyone in. Will she be able to reach his heart before it’s too late?

Oh I enjoyed Whispered Music. Beauty and the Beast is my favorite Disney movie, I can't tell you how many times I have watched it, and so I was curious to read this retelling of that story. Especially since I enjoyed the first book in the series so much. Luckily this one was just as good. Oh I loved it! The story was a lot like the Disney movie in some ways, some scenes reminded me so much of scenes from it, but also very different. It was wonderful.

Dominique has a dark and disturbing past. A past that still haunts him and makes him think he can never have love. A past that makes him think he is a horrible person, that makes him think he will become what he most fears. He is a bit of a recluse, but also a music prodigy. The music just flows out of him. He hears it and it calls to him. I loved that about him. I loved reading how he sees music, how it tells him when there is danger, how it makes his world so different from others. It was beautiful to read. He never though this life would change when he decides to go to one ball and see Isabelle. Isabelle who's music is telling him she is in danger. Isabelle who he must save even if that means she is saddled with him.

Isabelle doesn't know why she has been uprooted and sent off with the beast that is Dominique. She just finds herself having to live with him and his moods far away from everything she has know. It is hard at first, but even though he is angry at times, she still finds herself thinking fondly of him. She knows he has scars, on the inside especially, that make him run a bit hot and cold. She keeps putting herself out there only to be rejected by him again and again. And yet she still wants to stay with him, still wants to help him try and fight his demons.

Oh they were so cute together! I loved it! I love the grumpy, beastly guy who is really a big softy. I love the girl who stays by his side even when he tries his hardest to scare her away. I love watching him open up and become more vulnerable and see them grow closer and closer. Yes it is rough at times, but oh did I enjoy this read. It was Beauty and the Beast, which I love, plus more that made it even better. Set more in a realistic world. Oh it was fun.

We also get to meet Hunter/Wolf. Dominique's best friend. He was fun. The two of them together were like a couple of boys roughhousing. They both egg the other on, needle them and I so enjoyed watching it. Wolf would try and make the beast angry while trying to help him realize that he can open himself up to Isabelle. That he would be a fool to loose her. It was fun and I can't wait to read his story next!

So overall a really great read. If you love Beauty and the Beast you won't want to miss this retelling. It was just so much fun.