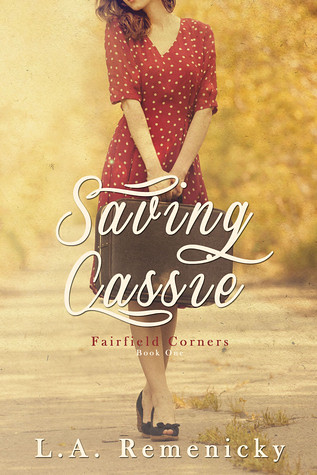 
Everyone has secrets. Sometimes secrets can get you killed.

After ten years in the big city, Cassie Holt is moving back to her hometown to take over the bookstore left to her by her beloved Gram, vowing to live her life alone. To her best friend, Sheriff James Marsten, Cassie seems to be the same girl that left Fairfield Corners to go to college but Cassie has secrets and one of those secrets could get her killed.

When one of her secrets becomes a threat to her life, James turns to his new deputy to help him keep Cassie safe.

Deputy Logan Miller has been burned by love and is not looking to get involved with anyone anytime soon. When he is thrown into close quarters with Cassie, the sparks begin to fly and he begins to see through the walls Cassie has built around her heart.

As the threat gets closer, can Logan protect Cassie and protect his heart?

I started reading Saving Cassie and thought 'this is alright.' The writing was too descriptive and not that good, but I still found it somewhat charming. I was still enjoying the story even though it was a bit dry and I couldn't really connect with the character at all.

Then suddenly this turned into a paranormal story and it lost me. It wasn't a lot of paranormal stuff, just once and a while it came up, but it was not good. It was just me rolling my eyes al the time and it unraveled quickly for me.

This is the story of Logan and Cassie. Logan who is not looking to get involved with anyone again and Cassie who has a bunch of secrets. Things didn't end well with her ex, he is in jail currently, but she doesn't want anyone to know the details. Especially not her best friend James.

When Logan and Cassie first meet it does not go very well. Logan is not the nicest, and he makes assumptions about Cassie. The following interactions he has with her don't really help. He thinks she is a bit flighty and flirty and he doesn't want to be attracted to her. Only when she needs help and protection he is there.

Okay so one of my main problems with the story was Cassie. She can be really stubborn for no reason and thrown tantrums when she doesn't get her way, even if what she wants is not the best/safest for her. For example she knows there are bad things going on. Knows it is not safe to stay in her house alone, but she fights James and Logan every time they try and keep her safe. Why? I have no idea! The way she went about it made her seem like a two year old stomping her feet because she can't just do what she wants. It was ridiculous. She would say how she is afraid to be alone, but at the same time doesn't want anyone else there. She doesn't want to need anyone, but she does. It was frustrating to read as she made no sense to me.

Things progress and Logan and Cassie fall for each other which I didn't really believe. You also have the paranormal aspect trying to get her and it was not good. The book kind of went off the rails for me big time once the demon stuff started happening. And the ending? No. I...it was bad. I was really looking forward to this read, but unfortunately it was not for me. I couldn't connect with any of the characters and storyline lost me by the half way point.