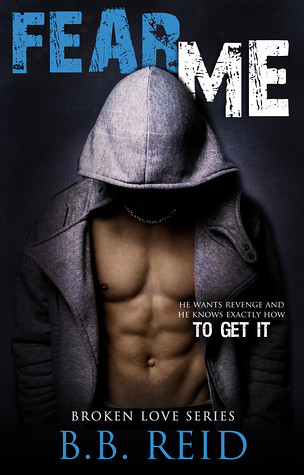 I don't believe in fairy tales and Prince Charming.

I believe in fear.

He taught me how to be afraid.

We first met on a playground on a wonderful summer day. It was the first time he hurt me and it wouldn’t be the last. For ten years, he's been my tormentor and I've been his forbidden. But then he went away, and yet I was still afraid.

Now he's back and wants more than just my tears. You see...he thinks I sent him away so now he wants revenge...and he knows just how to get it.

Fear Me, in all, contains sensitive themes many people aren’t able to swallow.

Note: This book made me very angry. It is not a romance. There will be spoilers and this may get ranty so you have been warned

Fear Me was a horrible read for me. I read it a while ago, but haven't been able to really write a review for it that is not really angry ranty. I just...I don't understand how anyone could like Kieran. How anyone would feel anything for him but hatred. How the author seemed to try to redeem him when he was WAY past the point of redemption from the very beginning of the book. It was bad. He was a super horribly abusive asshole, way more than a "simple" bully. Serious hardcore physical, mental, emotional abuse is what he deals out and that is so wrong. There is no way what he does should EVER be okay, or even remotely close to okay. No. Just no. I like dark reads, I have enjoyed books with a similar theme (like Bully by Penelope Douglas) but this one was just wrong.

Okay so before I move on to the plot of this story let me start with the writing and book overall. It was way way way too long. Or felt like it was. The same thing happened again and again and again. Kieran would be horrible, Lake would be all I hate him/I want him cause he is OMG so hot!, she would try to maybe fight back a bit, then realize she can't and he would threaten her/her aunt. Lather, rinse, repeat for a billion pages. So even if the author could have turned it around and made me like Kieran or be okay with him and Lake it still wouldn't have worked for me. It was too long.

We are first introduced to Kieran and Lake when Lake is eight. She is trying to help another kid down from the monkey bars and Kieran tells her not to. She doesn't listen and he pulls her off making her fall on the concrete and break bones. Yep, he is a winner right from the start! Then we have a ten year time jump. Kieran was in jail or juvie or whatever, but he is now coming back to finish his senior year of high school. When Lake finds out she literally passes out from fear. Kieran has been tormenting her for ten years and she thought she would be able to finish high school and move far, far away. That she would be able to leave everything behind.

Instead he gets out and thinks that Lake set him up so he is even more angry with her than normal. He is going to make her last year absolutely miserable, even worse than before, because of that. Now this story falls into the high school kids who have nonexistent parents thing. Lake's aunt is an author and with Kieran being a super nightmare Lake is happy that she is going away for 6 weeks for a book tour. Then she doesn't have to worry about him killing her aunt like he threatens...only she does. Kieran apparently has people who can follow the aunt around and will kill her if he says so so...Lake has to do what he says. Only she half heartedly tries to fight him off occasionally, but then succumbs as she also has a secret crush on him. Yep, I buy that. I don't care how hot you are if you made my life a living nightmare for ten years, literally passed out from fear when hearing you are returning, I don't have a secret crush on you. Sorry but no.

So this book was just a mess for me. I hated Kieran, there was nothing about him that was good, and Lake was no better. She was a weak whiny girl who somehow loved the guy who tortured her for years. It made no sense. Kieran rapes her and she is all I wish he was always in my bed. Yeah, not good. Oh and Lake's friends? Her bff who knows every horrible thing Kieran has done to her - how was she? Well I can tell you if I were Lake's friend I wouldn't be all ooo! Are you and Kieran a couple now?? Do tell! This is great! I would be trying to keep her as far away from him as possible. It again didn't make any sense to me.

So somehow Kieran is able to get away with simultaneously threatening everyone, adults, kids, everyone, but also having everyone somehow love him. I don't know why. Then we get to about half way and Kieran decides he is going to change and they are just going to be a real couple and whatever. It was still bad. And you learn his backstory - apparently there is an army of 7 year old assassins out there. Sure. Oh and the timeline didn't seem to make sense. The aunt was supposed to be gone for 6 weeks, but it seems like she was gone for longer. Maybe I just missed it and it does work, but just with reading the story it seemed like the aunt was only going to be gone for 2 more weeks for way more than 2 weeks. It was all just a bit of a mess and definitely not the book for me. I hated it, hated the characters, hated pretty much everything about it. Apparently I am in the minority though as plenty of people love it. I can see if you have some rape/abuse fantasy or something this could work, but I don't. I like dark stories and characters who have to overcome things, but not abusive assholes who threaten to kill you and your loved ones to make you do stuff. Not cool. Not cool at all.