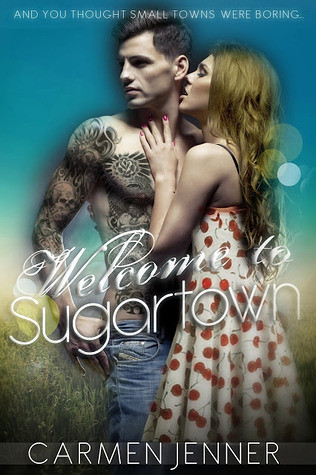 
Ana Belle never wanted anything more than to hang up her apron, jump on her Vespa and ride off into the sunset, leaving Sugartown in the dust.

Elijah Cade never wanted anything more than a hot meal, a side of hot arse and a soft place to lay his head at night where he could forget about his past.

But you know what they say about wanting: you always want what you can’t have.

Nineteen year-old virgin Ana is about to discover that’s not quite true because a six foot three, hotter than hell, tattooed, Aussie sex god just rode into town. He’s had a taste of her pie and he wants more– no really, Ana bakes pies for a living, get your mind out of the gutter.

She’d be willing to hand over everything tied up in a big red bow, there’s just one problem; Elijah has secrets dirtier than last week’s underwear. Secrets that won't just break Ana’s heart, but put her life at risk, too. When those secrets come to light, their relationship is pushed to breaking point.

Add to that a psychotic nympho best friend, an overbearing father, a cuter than humanly possible kid brother, a wanton womanizing cousin, the ex from hell, and more pies than you could poke a ... err ... stick ... at.

And you thought small towns were boring.


Content Warning: Intended for a mature 18+ audience. Contains explicit sex, oodles of profanity and a crap-tonne of AWKWARD.

Welcome to Sugartown was not my favorite read. It was meh in the beginning and turned into an annoying read by the end. It just was not for me.

Ana is tired of her life in Sugartown. She dreams of getting out one day. She has a horrible ex who spread false gossip about her (that she is easy and gives it up for everyone), a dad who somehow believes that, a step-mother she hates (who is not much older than her) and a bff who is only there for comedic relief. As I have said before in other "comedy" reviews that is a hard one for me. Usually it is not my sense of humor and that was the case with the first half of this book. It just...can the bff not have an actual personality? Can she not be a character instead of just there to make jokes? I didn't like that much.

Then we have Elijah who just moved to town and is working with Ana's dad. They have some "fun" conversations, back and forth, and it was just meh for me. I mean I didn't actually see the connection between the two of them. It was just an instant he/she is soooo hot!! I want to get with them!! and that was the basis of their so called relationship. It was just...meh.

So Elijah has a bad past. He has secrets that he can't share with Ana, and Ana doesn't want to let him in. She is a bit afraid of getting hurt like she did with her horrible ex. So it takes a little bit, but she starts to cave. Then Elijah's past catches up to him and there are some bad things that happen and then Ana got super annoying to me. After bad things happened she was just like I cannot be with Elijah!! He LIED to me!!! How could he?!?! So she refused to see him. It was just...she would be all mopey, poor me, yet he never really lied and what about the bad stuff that happened? Why are you not upset because of that? It was just odd as she should have been more concerned about what actually happened as I could understand her not wanting to be with him because of that. So she was just kind of super annoying for the rest of the story.

Oh and there is a really not cool scene where Elijah basically rapes Ana. No means no, but he doesn't stop when she asks him to. And afterwards when she says she didn't want it he tells her something like I would have stopped if I thought you meant it. Our hero...not cool. Not cool at all. So this is like in the middle of the story so at this point I am not a fan of either of them. And it just kept getting worse.

Ana decides that it will be a super great idea to go drinking and hang out with her dirtbag ex. I mean why wouldn't you? He sounds super! And super bad stuff happens, and Elijah avenges her in a really not cool way, he does get locked up, but Ana is all I want to be with him, but I can't, but he is so hot, but I can't, but can I? Oh poor me. Poor poor me. Ugh. Not cool. Not good at all. Of course we get out happily ever after and by that point I was kind of like whatever. Maybe you two should be together - then no one else has to be. See not my book.