Between Shades of Grey by Ruta Sepetys 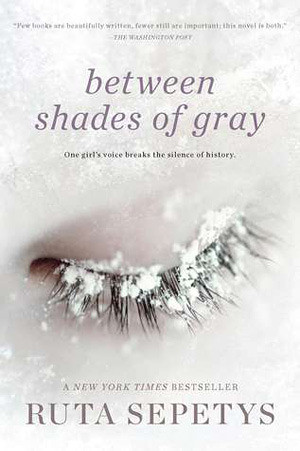 
Lina is just like any other fifteen-year-old Lithuanian girl in 1941. She paints, she draws, she gets crushes on boys. Until one night when Soviet officers barge into her home, tearing her family from the comfortable life they've known. Separated from her father, forced onto a crowded and dirty train car, Lina, her mother, and her young brother slowly make their way north, crossing the Arctic Circle, to a work camp in the coldest reaches of Siberia. Here they are forced, under Stalin's orders, to dig for beets and fight for their lives under the cruelest of conditions.

Lina finds solace in her art, meticulously--and at great risk--documenting events by drawing, hoping these messages will make their way to her father's prison camp to let him know they are still alive. It is a long and harrowing journey, spanning years and covering 6,500 miles, but it is through incredible strength, love, and hope that Lina ultimately survives. Between Shades of Gray is a novel that will steal your breath and capture your heart.

I was really looking forward to reading Between Shades of Grey. I remember listening to an interview with the author when it came out and was just really intrigued. This is a part of history I just don't know much about. The Soviet work camps that were happening at the same time as everything else during WWII. I really wanted to read the story and learn more even though I figured it would be a hard to read.

Unfortunately the writing really didn't work for me. Everything was written in these super short sentences and chapters so it felt like here is just a small tidbit and another and another. It was just too choppy and I couldn't get into the story. It did not work and made me not really care about the people/characters as it was just eh.

The other problem was the main character herself. She was a bit selfish and self absorbed and often didn't make sense to me. She jumps to conclusions all the time and just is horrible to other people if she thinks they did something she deems as wrong. I really did not like her. She was pretty stupid and didn't seem to care for her life or the life of her family members. She always thinks about doing stupid things that could get them all killed, or does things that are not good. She wants what she wants and doesn't care who it effects. I did not like her.

That and the Soviets were not as bad as I thought they would be. From the deplorable conditions of the trains they were forced to ride in to get to their end locations I expected the camps to be horrible, terrible, awful places. They weren't good places, but they just weren't as bad as I expected. Maybe part of that is the writing didn't describe the setting very well so I didn't feel or see how horrible it was. However when the people living there are able to steal so many supplies from the Soviets and such it just...I don't know. It seems like someone would get caught or they would be a bit harder on the workers than they were.

I was just a bit disappointed overall with the whole story. The writing didn't draw me in and make me care about any of the people or what happened to them, and the main character I greatly disliked. That coupled with the poor descriptions and choppy writing made it so it just didn't work for me.