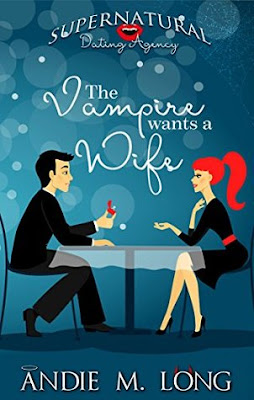 Running a dating agency can be a killer…

Shelley Linley is sick of sickos. Yet another prankster has applied to her dating agency. This one says he’s a vampire and he wants Shelley to help him find a wife.

Meeting him for a second interview against all her better judgement, Shelley discovers that he has no clue about women. A shame because he’s super-hot, amusing, and has a lot of single friends he could recommend her struggling business to, even if he does say they’re werewolves and demons. She has to help him, even if he’s crazy.

If she can ignore his delusions, she’s sure she can help him meet someone. But when death threats start arriving on her doorstep, Shelley’s not sure she’s cut out for the job…then her dating algorithm states she’s his ideal partner. Now she’s not sure if she should take the risk for love, or run like hell.

Welcome to Withernsea and the Supernatural Dating Agency, for readers of Michelle Rowen, Gerry Bartlett and Michele Bardsley who like their humour to have bite.

Buy The Vampire wants a Wife to see if Theodore gets his happy forever after.

Vampire Wants a Wife was an okay read, but not my favorite. A lot of it felt really rushed and if it would have been a longer story maybe I would have enjoyed it more.

Shelley is a matchmaker. She helps other people find love, but has never found it for herself. When she gets an application from a guy who claims to be a vampire she of course doesn't believe him. Then her bff/assistant sets up an interview with him because...well I don't know why, but she does. Shelley tries to find a way to trick Theo into seeing that he is not really a vampire and things got a little...crazy. But not in the best of ways for me.

Theo and Shelley apparently are meant for each other, but I never really saw it. That I think was one of my main issues with this story, the characters. They felt a bit flat to me and I didn't really see any of the relationships. I didn't see Shelley really falling for Theo and the sexy time between them was...not my favorite. I may have skimmed it because I was not a fan.

So Shelley starts dating Theo once she realizes he really is a vampire and there is supernatural stuff. Only someone isn't happy about that and she starts getting threats. If she is going to have a happily ever after she is going to have to figure out who is threatening her and why.

Now overall I was just meh on this story. Like I said I didn't connect with any of the characters. I didn't care for most of the side characters either. I especially didn't enjoy the bff/assistant. It is the kind of humor I don't care for. Kind of immature friendship relationship and not for me. That and the quick pace so everything happened so fast the story didn't work for me.