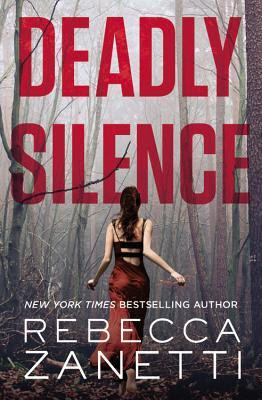 Under siege. That's how Ryker Jones feels. The Lost Bastards Investigative Agency he opened up with his blood brothers has lost a client in a brutal way. The past he can't outrun is resurfacing, threatening to drag him down in the undertow. And the beautiful woman he's been trying to keep at arm's length is in danger...and he'll destroy anything and anyone to keep her safe.

Paralegal Zara Remington is in over her head. She's making risky moves at work by day and indulging in an affair with a darkly dangerous PI by night. There's a lot Ryker isn't telling her and the more she uncovers, the less she wants to know. But when all hell breaks loose, Ryker may be the only one to save her. If his past doesn't catch up to them first...

Deadly Silence was so much fun to read! Super hot, a bit intense, a bit of everything I love wrapped into one story. I can't wait to read more!

Ryker is a bit of a loner. He has his brothers, the family created when they were younger. The two people he knows he can trust with his life. He has a lot of secrets, he doesn't like to think about his past and what happened to all of them. Because man it is dark. And not good. But they survived as long as they can keep off of the radar of those who may be out to get them.

Zara is having an affair with Ryker, but she thinks it is just sex. Because she doesn't really know Ryker, and anyways he is a bit to dark and dangerous for her. Right? Only when she gets tied up with something that puts her in danger the two of them have to work closer together. And maybe there is something there after all.

I loved Ryker. He is one of those big, grumbly, silent, teddy bear type guys. My favorites. He would do anything for those he cares about. And he would do anything to keep Zara safe. He doesn't like talking about what he went through as a kid, but when his past comes into his present they all have to figure out what to do. Zara is right there for him and everyone helping out however she can. The two of them together were great. I loved this story, I love the thriller what is going to happen next suspenseful nature of it. I love the romance woven in there and watching these two fall for each other. Really I can't wait to move on to book two and see what happens next!