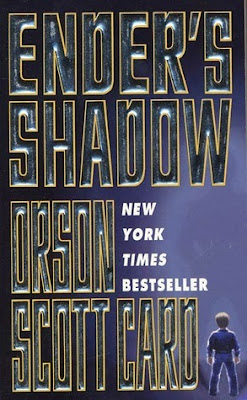 Growing up is never easy. But try living on the mean streets as a child begging for food and fighting like a dog with ruthless gangs of starving kids who wouldn't hesitate to pound your skull into pulp for a scrap of apple. If Bean has learned anything on the streets, it's how to survive. And not with fists—He is way too small for that—But with brains.

Bean is a genius with a magician's ability to zero in on his enemy and exploit his weakness.

What better quality for a future general to lead the Earth in a final climactic battle against a hostile alien race, known as Buggers. At Battleschool Bean meets and befriends another future commander—Ender Wiggins—perhaps his only true rival.

Only one problem: for Bean and Ender, the future is now.

When I saw that there was a book that would take place during the same time as Ender's Game, the first sci-fi books I read and loved, was coming out, that we would get that same story from Bean's perspective,  was super excited to read it. Because as I said I loved Ender's Game. It was a great story and I couldn't put it down. And I was curious to see what Bean's life was like before battle school.

Only I started this book and kept thinking wait - is this the same author who wrote Ender's Game? Was the writing this bad in that book? Because this was not good. This is like bad fanfic and I thought Ender's Game was well written. Did someone else write this? It made no sense to me and I haven't gone back to Ender's Game yet to see if I was misremembering how good it was or if this really was just that bad.

Now this story could have been interesting, but it was written in such a dull way. I didn't really care about Sister Carlotta's mission to find out where Bean came from. He is super smart even though he is so young and she is determined to find out why. Which really doesn't matter and the flashovers to that storyline dragged it down. Bean "growing up" on the streets and all he had to deal with could have been interesting, but again the writing didn't back it the way it should have. Bean is smart and surviving and he gets in some bad situations, but I didn't care that much. Which made me sad. Because I should have.

I thought once he got to the Battle School things would get more interesting, but instead, they made the characters I knew from Ender's Game be...not as good. Namely Ender. He came off as a jerk instead of a kid who is helping his teammates become the best they can be. He might be tough on them, but they will be better for it. In this, he seemed full of himself and not a nice person. I don't know. It kind of ruined him a bit which I was not a fan of.

This whole story was just not good. It was dull and the writing made me think someone else must have written it. Ender's Game can't be this bad right? I may have to go back and re-read Ender's Game just to see. But part of me is worried that the writing will be sub-par like this and it will ruin the story for me as well. We shall see.