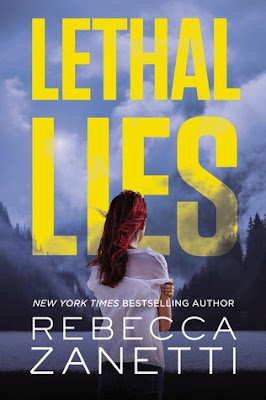 Revenge. It's the only thing that will help Anya Best sleep at night. The serial killer who murdered her sister is on the loose, and Anya will stop at nothing to put him behind bars-even use herself as bait to lure him out of hiding. But she can't do this alone.

Private investigator Heath Jones's job is to bring bastards to justice. This time it's personal. He knew the Copper Killer's latest victim so when her sister asks for his help, he's all in. But when Anya uses the media to taunt the killer, she exposes Heath's identity, putting them both in jeopardy. Now, secrets buried long ago are coming to light and the forces determined to destroy him are watching Heath's every move, waiting to exact their own revenge. And they'll use anything and anyone to get to Heath.

With twists and turns that will take your breath away, LETHAL LIES is sexy, action-packed suspense at its very best from New York Times bestselling author Rebecca Zanetti.

Ah! Lethal Lies was just as good as the first book! I am really enjoying this series. I love the action-packed intense romances that they are and I can't wait to read on and see what happens next! Note: While this is about a different couple from the first book, I would still read book one before reading this. Because you need all of that backstory that you wouldn't get if you just jump in here. The overarching story is a continuation. Plus book one is great so why not read it?

Anya's sister was murdered and she is determined to find the killer and make him pay for what he did. She will do anything to stop him, even put herself in harm's way. She is attracted to Heath when she meets him and makes a crazy split second decision to taunt the killer and reveal exactly where Heath and his brothers are. If you read the first book you know some seriously messed up people are trying to track them down and they don't want that. They had enough of those people as kids and they don't know what will happen if the bad guys catch up to them again.

Now Anya and Heath were pretty much insta-love, but it worked for me. There is so much going on, so many things to try and keep track of and take care of it is a bit crazy at times. The bad guys are super bad and I can't wait to read on and see Denver get his happily ever after as well! These guys are all amazing and super supportive and would do anything to help those they care about. They are so much fun to read!