Review: A Girl Like You (Magnolia Sound #2) by Samantha Chase 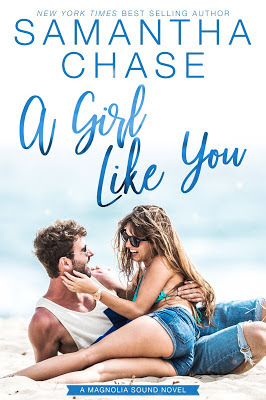 Sam Westbrook has always been the family hell-raiser, but as an adult he's enjoyed not being under the constant watchful eye of his family. That was until his great-grandfather passed away. Forced to move to the small coastal town of Magnolia Sound, Sam can't escape the reputation that has followed him since his teenage years. But he'll have to do it to get his inheritance.

Shelby Abbott was always the good girl – it's what happens when you're the pastor's daughter in a small town. Now, she's ready to leave that image behind. For years she's heard about wild Sam Westbrook, but she never though she would be the one to catch his eye. And being the center of Sam's attention ins't something Shelby ever prepared for.

Sam's time in Magnolia Sound has an expiration date and Shelby's not sure she's the kind of girl who can be just another one of his flings. But Sam's ready to make some changes. And a girl like her is just who he needs.

A Girl Like You was a cute read. Sam and Shelby were perfect together and I enjoyed watching them fall in love.

Sam is one of those people who doesn't like to be too tied down to a person or a place or anything. He moves around and was a bit of a trouble maker growing up, but never did anything super bad. He never planned to go back home and live especially since everyone in their small town will look down on him for what he did in his past and he can't stand that. They will only see who he was not who he has become and it is frustrating for him. Only his grandfather passed away and left him a business to run, a business he probably would have been happy to have if he wasn't forced to work there for at least a year or forfeit the inheritance. He doesn't like having to do things, he doesn't like all the judgmental looks he gets from everyone in town, he just is not too happy. He is counting down the days until he can leave again.

Shelby is a librarian in town and loves living in Magnolia Sound. She is the preacher's daughter, a good girl growing up, and never really got into any trouble. She has had a sorta crush on Sam for a bit now, but he would never notice someone like her.

When the two meet one night they hit it off, only things aren't as easy as they seem. I love how Sam was all in right away. How when he knew what he wanted, when he found someone he connected with in that way he didn't hesitate. He was really sweet, though he does have some issue in regard to his past and how people see him that he need to work on. He felt he was always selfish before, but now he tries not to be, but not always in the best ways. His heart was in the right place, but he doesn't always do the right thing. He was sweet and I was so wanting things to work out for him.

And Shelby was a sweetheart as well. So kind and caring, but she has some hangups of her own to work through. They were really perfect together and it was fun watching them figure everything out. It was a cute, fun read.