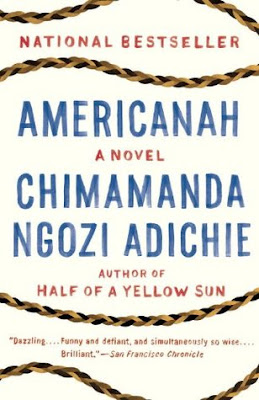 Ifemelu and Obinze are young and in love when they depart military-ruled Nigeria for the West. Beautiful, self-assured Ifemelu heads for America, where despite her academic success, she is forced to grapple with what it means to be black for the first time. Quiet, thoughtful Obinze had hoped to join her, but with post-9/11 America closed to him, he instead plunges into a dangerous, undocumented life in London. Fifteen years later, they reunite in a newly democratic Nigeria, and reignite their passion—for each other and for their homeland.

Americanah was an interesting read. It starts off with the main character, a non-American African, and her take on African American which I found really interesting. It is something I have never thought about before so a lot of it was new to me. For example, the book opens with Ifemelu going to get her hair done and talking about how much effort you have to put into not having your hair be an afro all the time. I had no idea it was so much work. I just wish I could have seen more of her everyday life in the US as a non-American African. The story was full of small segments, small things that would happen or she would comment on that would make me think, but then long sections of so-so story. I would have liked more of her blog and her observations about what it is like for her to live in the US as I enjoyed those parts.

The story started off strong for me, a glimpse of non-Africans in the US, but then it went back to her as a child in Nigeria and made me lose interest. It didn't seem realistic from what I know of the country. I read this book for book club and the one lady said after reading it she wanted to go visit Nigeria, tour around the country, wanted to visit where Ifemelu lived, as it sounded lovely. Maybe I am mistaken and it is not as bad as I thought, but I didn't think it was all sunshine and rainbows like the author depicted. It seemed to me like maybe she softened it a bit for the North American reader, but I don't know. This section was just okay and didn't really get me involved with Ifemelu and Obinze. I didn't really care about either of them so...

Then it skips to Ifemelu in the US and trying to set up a life there, which was more interesting. I enjoyed her commentary like I mentioned above as it made me think about things that I, as a white person, hadn't thought about before. But then the ending was just...I didn't like it. I never felt the connection between Ifemelu and Obinze so it was not that good for me. I would have preferred it end a different way (**spoiler alert** I would have preferred it ended with Ifemelu alone instead of what actually happened).

Overall there were some interesting parts, but overall it was just an okay book. A good read, but not a great read.