Review: The Devil in the White City: Murder, Magic, and Madness at the Fair That Changed America by Erik Larson 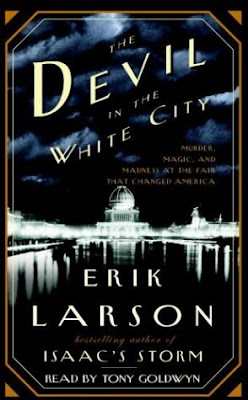 Two men, each handsome and unusually adept at his chosen work, embodied an element of the great dynamic that characterized America’s rush toward the twentieth century.
The architect was Daniel Hudson Burnham, the fair’s brilliant director of works and the builder of many of the country’s most important structures, including the Flatiron Building in New York and Union Station in Washington, D.C.

The murderer was Henry H. Holmes, a young doctor who, in a malign parody of the White City, built his “World’s Fair Hotel” just west of the fairgrounds — a torture palace complete with dissection table, gas chamber, and 3,000-degree crematorium. Burnham overcame tremendous obstacles and tragedies as he organized the talents of Frederick Law Olmsted, Charles McKim, Louis Sullivan, and others to transform swampy Jackson Park into the White City, while Holmes used the attraction of the great fair and his own satanic charms to lure scores of young women to their deaths.

What makes the story all the more chilling is that Holmes really lived, walking the grounds of that dream city by the lake'The Devil in the White City' draws the reader into a time of magic and majesty, made all the more appealing by a supporting cast of real-life characters, including Buffalo Bill, Theodore Dreiser, Susan B. Anthony, Thomas Edison, Archduke Francis Ferdinand, and others.

In this book the smoke, romance, and mystery of the Gilded Age come alive as never before. Erik Larson’s gifts as a storyteller are magnificently displayed in this rich narrative of the master builder, the killer, and the great fair that obsessed them both.

The Devil in the White City was an odd read for me. It was like two books trying to be one and it didn't really work. The two events, the worlds fair and the killer, didn't really have anything to do with each other. They just happen to have happened at the same time in Chicago. I expected more of a link between the two since that is what the book was about. It almost seemed like the author wanted to write about the world's fair, but didn't think anyone would read it so he threw in the murderer to get people to read the book. Honestly I would have enjoyed a more in depth book about the killer, what happened after and everything, and not so much details on the fair.

I enjoyed the killer parts of this story much more than the World's Fair parts. While it was interesting all of the things that happened to make it and get everything done on time, it was way too bogged down in details I didn't care about. I didn't care about what the men ate when they met up with people in New York. I didn't care about seemingly every conversation they ever had with anyone even remotely involved. It was too much. I got bored because it is not something that interests me. If that were the entire book, just the fair, I would have DNF-ed it. As it was I read it for book club so I had to read to the end anyways. Oh, also the author while trying to just write what happened from what we knew also interjected a lot of things that there is no way anyone would know. Like so and so thought this at this time, but how would you know? With the killer maybe something one of the victims would think right before they were killed, but there is no way to know that. I know it makes for a better story, but in the non-fiction it kept bringing me out of the story. Oh and the deliberate trying to create mystery and stuff was annoying. Like what would the big thing at the fair be? The author kept talking about the guy who was making it, would hint that it was something big, but wouldn't say his name until the last second and which point I was annoyed. I don't know why it had to be a big secret. If I really wanted to or knew anything about the fair I would have known it already and it just...it felt cheap to me. Like the only way to get people to keep reading is to make a mystery so they want to find out.

Now the killer, Henry Holmes, was an interesting one. I remember hearing a little bit about him, but this story was also light on the really interesting parts. I wanted to know more about his hotel and how that worked. How he killed there, what happened, everything. You did get some of his past and some of who he was at the time, but I wanted more. I especially wanted more of what happened after he left Chicago. There was like one line on how he kept doing this here and there and then something about how he was caught. For a story about these two things I felt there was way too much minute detail about the fair, but still didn't really let me know what it was like to go to the fair once it was opened (I never really got a feel for it - maybe a map or something would have helped), and didn't get as much detail on Holmes as I would have liked. So it didn't really work for me. If you like architecture this book may be for you. Otherwise not so much.