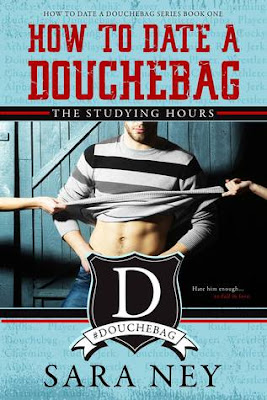 CRUDE. ARROGANT. A**HOLE.
No doubt about it, Sebastian ‘Oz’ Osborne is the university’s most celebrated student athlete—and possibly the biggest douchebag. A walking, talking cliché, he has a filthy mouth, a fantastic body, and doesn’t give a sh*t about what you or anyone else thinks.

SMART. CLASSY. CONSERVATIVE.
Make no mistake, Jameson Clarke may be the university’s most diligent student—but she is no prude. Spending most of her time in the hallowed halls of the library, James is wary of pervs, jocks, and douchebags—and Oz Osborne is all three.

She’s smart, sarcastic—and not what he expected.

…EVERY DOUCHBAG HAS HIS WEAKNESS.

If you would have told me I would read and enjoy a book about dating a douchebag I would have said you are crazy. Really had I not read the authors Liars series prior to this I never would have picked up this book to read. It just doesn't seem like something I would enjoy. Well now I understand. I see what I would want to date a douchebag.

Oz is definitely a douchebag. He is a jerk, he goes through ladies like they are water, he doesn't really care about anyone or anything. He is doing his things and living the college life.

James always wears a cardigan. She always projects that she is classy and conservative. When Oz comes over to talk to her one time, see if she is his buddies tutor, she blows him off. Doesn't even look at him when she talks. So his buddies rag on him and bet him that he can't get her to kiss him. And it was on. One kiss was all it took, but neither of them really realize it at the time.

Sebastian, aka Oz, goes to make good on his bet and to his surprise when he tells her James actually lets him kiss her. After that they keep finding themselves in the library studying together. Or maybe not together together as Sebastian seems to bug James more than study, but it is their thing. Nothing is going on there even though Oz tries to ruffle her feathers. He is always making crass sexual innuendos and such to her. It was kind of fun.

This is definitely not an insta love story. In fact James does everything she can to keep Oz away. She doesn't want to like him and knows he would just hurt her if she were to try. But there is something about her that Sebastian likes. Something that draws him to her, but it takes him a long time to figure that out. He makes a lot of mistakes, but eventually they realize what they have. It was a cute, fun read and I can't wait to read Zeke's story now. I want to see what is up with him cause he is a super jerk. More so than Sebastian.