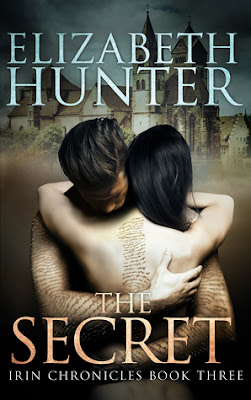 Only when the darkness falls can you see the light of the stars.

For thousands of years, the scribes and singers of the Irin race have existed to protect humanity and guard the gifts of the Forgiven. They have lived in the shadows. They have kept their secrets.

But the Irin aren’t the only race with secrets.

Ava and Malachi have found each other, but wounds as deep as theirs don’t heal overnight. While the Irin world struggles to correct the power imbalance left by the Rending of the Irina, Malachi and Ava struggle to connect their past with their present.

The Fallen may scheme, but Ava has found her power and refuses to be an angel’s pawn. And while Malachi may have forgotten his history, the scribe’s relentless search for answers leads both him and his mate to the heart of the Irin power structure in Vienna, where knowledge is guarded more closely than gold and those with power will do anything to keep it.

Malachi and Ava have survived the darkness, but will they ever discover its secrets? A powerful cabal of the Fallen may hold the answers, but to surrender them, it wants the Irin race to finally face their enemies. Both those coming from the outside, and those raging within.

THE SECRET is the third book in the contemporary fantasy series, the Irin Chronicles, and the conclusion of Ava and Malachi’s journey.

The Secret was not good. I was hoping for a fun epic ending to this series and instead I got an annoying, not surprising, confusing ending to things. Some slight spoilers ahead.

The Secret picked up where the last story left off and Ava...turned into this weak, lame girl. She was afraid of everything, afraid to use her powers cause she might hurt someone, just super lame! I was like what happened to her? I know she was shutting down because Malachi was dead, but he is back and...I didn't get it. I didn't understand why she was suddenly so weak and poor me.

Then she gets back to more her normal self and it was just okay. There were a lot of "surprises" that weren't surprises. They were all obvious and I couldn't figure out why the other characters didn't see what was happening or whatever until it was revealed and then they were all shock! What?! For example Malachi and Ava move into a place in a city and a cat shows up. It is noted how gold the cat's eyes are so I thought oh, it is one of the fallen. That is cool they can change to look like animals also. Only no one ever thought about that! No one. Not until later when the cat changes into the fallen and Ava is all no way!?! I didn't know the cat was you!?! When it was obvious to me the entire time. Or at least I would have thought how odd it was that the cat has the same color eyes as the fallen...There were so many instances of this it annoyed me.

Also I don't really understand why there was such a big deal made about Ava. Yeah she was part of one of the surprises, but to save the day they didn't need her except to lure the one fallen angel to where they wanted. Other than that it could have been anyone so...She didn't even do that much in the end. She was told special words that would help, but they could have told any Singer that and it would have been the same result. So she was just a lure. And that was...disappointing. Plus the big surprise at the end and how everyone was so upset and broken by it...I didn't like. I might be heartless, but if there are bad people I will take them out regardless of who they are/how old they are. So yeah. I didn't enjoy this final chapter to this story. I was hoping for a fun, epic battle and I got scared Ava, then lots of not-surprising surprises, and a lackluster showdown.