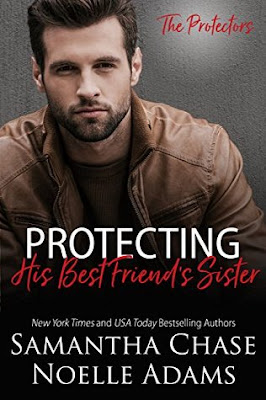 Protecting His Best Friend's Sister was originally published as Duty Bound. It has since been expanded, revised, and re-edited.

The only woman I want is the one I can never have.

Harper. My best friend's sister. I've wanted her since I was eighteen, but she's always been off-limits. Now I'm home after years in the Marines, and nothing has changed--except everything has. Her brother is dead, and she's on a hopeless quest for answers about his death.

And I want her just as much as ever.

Someone is trying to kill her now, and she won't let me keep her safe. I have to protect her anyway, even if she doesn't trust me, even if she hates me for it. A man protects what's precious to him, whether or not he can ever claim her for his own.

And Harper has always been precious to me.

Protecting His Best Friends Sister was an interesting read for me. This is an updated re-release of Duty Bound which I had read before and didn't care for. I gave it 2 stars as...well the girl annoyed me and the two main characters didn't work that well. That and Levi was a bit to over the top. I had forgotten that this was an updated version of that story when I started and I found I really enjoyed it. Much more than the original version. I am not sure exactly what was changed or added, I did compare the intro to both and this version reads a lot better than it originally did. Not that there is a huge difference, the story is still the same, but it works now. Small changes here and there, little things added really made this a much more enjoyable read for me. I am glad the authors decided to re-release this as I love them both and so it is nice to have another book of theirs to re-read.

Harper is a stubborn, headstrong lady. She always has a cause she is fighting for and no one can stop her from getting to the bottom of something once she puts her mind to it. Her brother recently died overseas in the military and she really thinks that there is a coverup. Something more happened than what they are telling her family and she is determined to find out what, even if it looks like someone doesn't want her to.

Levi was Harper's brothers best friend. He has known Harper practically his whole life and has had a crush on her for a long time. There is just something there, she is it for him, but he can't act on it. I mean it is his best friends sister! And now his best friend isn't here anymore so it is really not the time to try and see what would happen with Harper. Only when she starts getting threats and odd things start happening he can't stay away. He has to keep her safe. That is what her brother would want. And that is the only reason he is spending so much time around her right?

These two were fun to read. Harper will be stubborn and get a rise out of Levi, but she knows when to take something seriously. She gets so annoyed when he steps in and tries to take things over, make her do things. She knows what she needs to do and she is capable of doing things. She has always felt like she needed to prove how capable she is since she is so short. It was fun. They kind of but heads a lot, but they both care for the other even if they don't want to. I really enjoyed this updated version of the story. The characters are the same, but small changes or additions made them more likable for me. More real so I understood the push and pull they had going on. This was a fun read. If you have read this one before and didn't care for it give it another try. It was great.