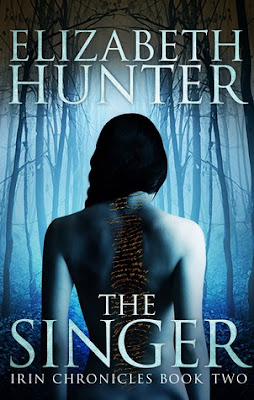 When you've lost everything you love, how do you fight the darkness?

Ava left Istanbul with a new identity, new name, and new magic she could barely control. Laid low by Malachi's sacrifice, she searches for help from the fabled Irina. But will the secretive women of the Irin race welcome or shun her? Ava's origins are still a mystery, and her powers are darker than any they've encountered before.

The Irin world hangs in the balance. And as the children of angels battle their own demons, ancient rivalries among the Fallen threaten to wreak havoc on earth.

Thousand of miles away, a warrior wakes with no memory of his identity or his people. Stumbling though the dark and twisted schemes of fallen angels, ravenous Grigori, and even his own leaders, he must find a way back to the one thing he remembers. A single voice calls him. Malachi has one mission.

THE SINGER is the second book in the Irin Chronicles, a contemporary fantasy series from Elizabeth Hunter, author of the Elemental Mysteries.

The Singer was a good read, but I didn't enjoy it as much as the first book. Why? Well there was too much conversation for me. If you read my review of book 1 you know I am not a fan of how this author writes conversations, so the plethora of them in this story made it just okay for me.

I did notice a reason why I might not like the conversations so much. It reads more like a questionnaire or something. One character will say something, the other will say "why?" or "How?" or some one word question, then the first would explain why they thought what they did or whatever. It was like I was going down a checklist while I was reading it and I didn't care for it. I don't know that anyone else really has an issue with this.

There was also a lot of telling of history in this chapter which...I didn't honestly care that much about. I was more interested in Malachi trying to find Ava again and Ava trying to survive without him. Watching Ava try and learn to control her powers and mourn. I really loved Malachi in this one. Because he doesn't remember a lot of who he is and what he does it was fun watching him learn. Watching him try to find Ava even though he doesn't really remember her. He just knows she needs him and he has to find her. He was really sweet.

Now there is something big brewing in this one that we get to see more glimpses of. Something that I can't wait to see how it turns out in the next book. Ava and Malachi are apparently something special so I am excited to see how it all turns out.