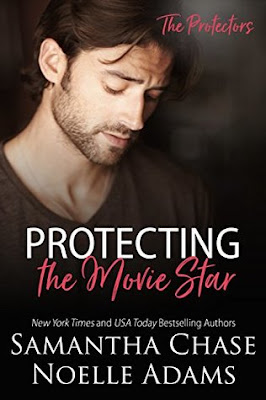 Protecting the Movie Star was originally published as Home Bound. It has since been expanded, revised, and re-edited.

The story of my life isn't pretty. I come from the wrong side of the tracks. I've been a criminal. I've been homeless. I almost killed my father, and I might be responsible for the death of my best friend.
I should not be wanting Evangeline.

Her life story is the stuff of dreams. She's America's sweetheart - beautiful, talented, and famous - and she doesn't want anything to do with me. I'll protect her from a stalker since it's my job, but that's all I'm allowed. No touching, no lusting, no falling in love. I'm all wrong for her, and she's completely off-limits.

But I've never been good about following the rules.

Protecting the Movie Star was a fun read. I was really curious to see who Cole would fall for and how he would be once he opened up a bit. He has always been a bit of a mystery, a bit...too serious. He hasn't had the best past and he hasn't been able to figure out how to get over things that have happened in his life.

Cole is friends with the other guys in the security company, but he feels like other people feel he is not as good as they are. Like everyone is judging him for who he was and his previous circumstances. Like he is not good enough for good people. He has always felt this way and still lashes out at times over things he perceives as insults that really aren't there. He has a bit of a complex about it. And I get it, but it also makes things harder for himself by clinging to this life isn't fair, everyone thinks less of me idea he has.

Cole really doesn't like rich and famous people. They have to all be spoiled brats who look down on everyone beneath them. He would definitely be beneath them so he lashes out with the anger before they can look down on him. Only his job is to now protect a movie star who is being stalked. He wants nothing to do with it, nothing to do with her, but no one else has the time to do it so it is up to him. So he resigns himself to doing the job and getting out of there. He is not there to be mister nice guy fall all over the star, he is there to keep her safe and that is it.

Evangeline may have grown up with a silver spoon, but she is not all posh judgy rich girl. She is genuinely nice to everyone and people love her. Except for her stalker. She thought she had enough security, but things keep getting by them and she doesn't know what to do. So she calls up her friend Sebastian since he started a security company and could help. And he sends Cole. Cole who she is drawn to until he opens his mouth and is not very nice. She doesn't know what his problem is, but obviously he is a grumpy, angry guy. Or he just really hates her for some reason.

These two were a lot of fun to read. They definitely don't start off on the right foot and even when they start to like each other it isn't easy. Cole gets in his own way all the time thinking things that aren't true just because he has his complex. The back and forth, the mean guy and nice guy, I loved it all. This might be my favorite out of the series. I mean how can I pass up a grumpy guy who becomes so sweet by the end? I can't.