Protecting the Enemy (The Protectors #2) by Samantha Chase & Noelle Adams 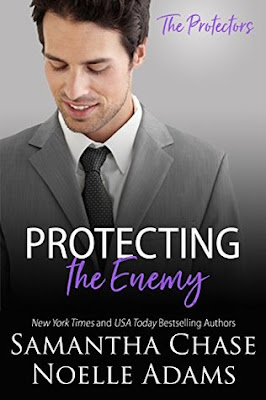 Protecting the Enemy was originally published as Honor Bound. It has since been expanded, revised, and re-edited.

Twelve years ago, I gave up the love of my life because my family made the relationship impossible. Now that Ali has come back to me, I'm not going to give her up again.

It's been years since I've seen her, and I know she's hated me all this time. I never expected to see her working as an event planner for one of my father's business partners. But here she is, always snooping around and getting into trouble. I'm supposed to be providing security, but I can't stop thinking about her.

She's up to something, and it might put her in danger. She sees me as the enemy now. Maybe I am, but I'm not going to lose her again. I might be hired to protect the man she's working against, but my heart only wants to protect her.

Protecting the Enemy was another great re-read. I really enjoyed Honor Bound, the original book, and the edits and revisions and additions weren't as apparent to me in this one, but maybe because I enjoyed the original as well (the first book in the series has gotten an update as well and I enjoyed it much more once it had). It was another fun read from these two authors.

Ali is not where she always thought she would be. She has had to get a job and help provide for her family after the Maxwell's took everything away from her. First Sebastian hurt her when he left her so long ago, and then everything else that happened since then. She had plans to go to college and do something a bit different with her life, but she can't. Her family needs her. If only she can find something on those who hurt her family maybe she can make it right.

Sebastian is not really like the rest of the Maxwell's. He got out, joined the military and served his country. Now he is home and his dad expects him to fall in line and take his rightful place in the family company, only that isn't what he wants. Instead he started a security company with his buddies from the military. The brothers he served with. And things are just getting started when he runs into Ali. Ali who he had to break it off with so long ago, but who he never stopped thinking about. Ali who he genuinely cared for, but it just wouldn't work at the time. Now that he has found her again he wants to see if he can get her to forgive him and give him another chance. Now if only she would stop snooping around places she is not supposed to be. It is making things trickier than they should be, but he will also help her if he can and she opens up to him.

Now these two have some issues with communication that makes the road to happily ever after a little bumpy. They make assumptions based on past experiences and what other have done and they have to work a little harder to make things work, but I really enjoyed watching them try. It was a fun read and both of these characters were great. Now I can't wait for the updated third book!