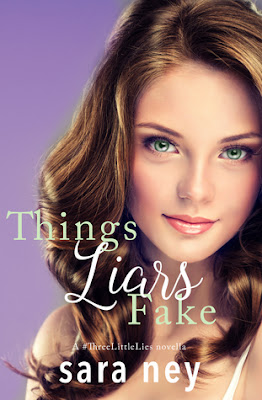 Someone you barely knew asked you for a favor.

They needed you to be something you weren’t, in exchange for nothing. Unless you count a mouth full of lies and a half-broken heart. Faker. Pretender. Liar. There are worse things to be called.

So would you do it? Would you?

And you’re about to find out what happens in the end.

Phew! Daphne and Dexter we so hot together! Ah! I loved this story! After reading Things Liars Say I immediately wanted more. I had this one on my Kindle so I had to read it and it was another great read. It was a lot of fun, super cute, hilarious story.

Daphne first sees Dexter when she is out with her girlfriends at a wine bar. He is with a bunch of jerk guys, but he doesn't seem to be happy to be with them which intrigues her. Plus he is wearing a sweater vest. To a bar. On a Saturday night. Who does that? Nothing really happens, but when they both find themselves alone at the theater the next weekend things get interesting. They are both there for the same vintage Sci-Fi film and there is that awkward they say hello, they go into the same theater, do they sit together? Do they keep talking? What should you do? thing.

They both liked each other right away, but Dexter is not very confident with women. Especially not women like Daphne whom he thinks is way out of his league. She is a hot, sexy nerd, but still a nerd and so she is perfect for him. She thinks Dexter is incredibly hot with his glasses and suspenders and oh I loved them! She wants to go on a date with him, but isn't sure if he is into her like that.

When his family thinks they are dating he asks her to play along. To go to a family gather as his fake girlfriend, and she agrees even if she is a bit disappointed to have to be his fake girlfriend. He always thinks she wouldn't go for someone like him, but they are sweet. With the help of Dexters pesky twin sisters these two eventually figure everything out, but I loved watching them get there. Lot of fun shenanigans that lead to super freakin hot sexy times! These two were perfect. This story was great. A super fun, lighthearted, funny, cute read. Now to go back and read the second one that I somehow missed.