Stolen in Love (Love and Lawbreakers Book 2) by G.G. Andrew 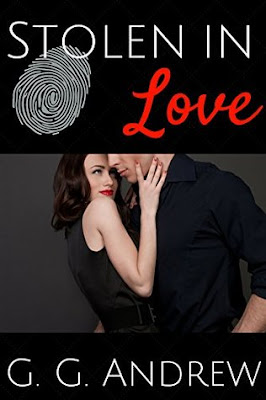 Kim Xavier steals things. She can't help it. Recovering from her shoplifting addiction has never been easy, but she's giving it a shot. When she comes home to a ransacked apartment, Kim knows she's finally taken the wrong thing from the wrong person. And she can't tell the police--especially not the cop whose heart she broke months ago.

Scott Culpepper wants Kim Xavier. He can't help it. Ever since he met the smart-mouthed woman while on patrol in New Haven, he hasn't been able to get her or her red lips out of his mind. Unfortunately, she's also got a police record, and the single dad has learned the hard way not to get involved with unpredictable women.

But when Kim is threatened by someone selling information used to harass women online, Scott steps up to keep her safe--even if it means spending more time with her than he should. The two work to unravel the case, which leads them from the dirty underbelly of the Ivy League to posh preschool parties to a drug dealer who can quote Kerouac. Though the biggest danger may be Kim stealing the very thing Scott can't afford to lose: his heart.

Stolen in Love was a great read. Sure Kim annoyed the bejeezus out of me at times, but I still liked her. I still wanted everything to work out for the best.

Kim is a thief. She has an addiction to stealing things. It gives her a rush even if she feels terrible afterward. But she is trying to get help and change her ways. She doesn't want to be a terrible person, she just thinks she is. She has a record and is not a fan of the cops (they aren't a fan of her either).

Scott is a cop. He first met Kim in the last book and was drawn to her. Only she lied to him and that hurt. A lot. He can't get close to her again and risk being hurt even more. Plus he has his daughter Lilly to think about. Lilly who seems to love Kim, but can he trust Kim around her? He can't take that chance.

When Kim comes home one night to her apartment ransacked and a scary note telling her to leave what she stole in her mailbox she runs. To her parents. Who live across from Scott. She didn't have another choice. She can't stay at her place and her sister is shacking up with the graffiti artist, her brother's place is probably disgusting, so she is going to try and put up with her mom. They don't really get along that well.

Kim has no plans of going to the police. After all they would probably just tell her she brought this on herself. If she didn't have a problem stealing this wouldn't be happening. Only her mom can't let it go at that. Thankfully she gets Scott involved and the fun began. These two are drawn to each other. They know they are not good for each other, the cop and the criminal, but they can't stay away. It was so much fun to read. Kim is not always the smartest, she thinks she is a terrible person and makes terrible decisions at times, decides to lie and keep things from those trying to protect her, but when she gets stressed she feels out of control. She is in recovery, but that doesn't mean she doesn't slip up, especially with everything that is going on. For as much as she frustrated me I still loved her.

I loved these two. They both have baggage, things they haven't really worked through, but they care about each other. It was fun. And how everything worked out, who was involved and what was going on, I absolutely loved. We also were introduced to some fun new character storylines and I hope we get a few stories for them. I wouldn't mind reading about Hutch and want to know the story with Kim's brother. Overall this was a great read. These two were so much fun together.