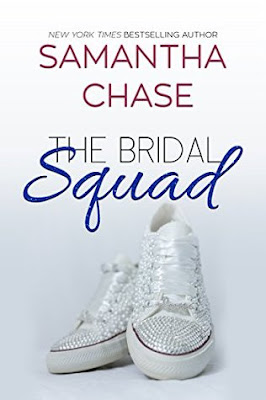 The Friday Night Brides are back! And this time, it’s their first season running the business! It was one thing to just model in a weekly fashion show, it’s quite another to be the ones calling the shots and making future brides’ dreams come true. Their first client has them wondering if they’re really prepared for their new roles!

The Bride: Julianne is big on fitness, small on patience. And planning her wedding is grating on her every last nerve. As a Zumba instructor, she loves the freedom to create and choreograph her routines and help others achieve their goals, but having to stand back and let others choreograph her big day has her wanting to hip-hop toward eloping!

The Matron of Honor: As the only married member of the bridal party, Natalie considers herself the aficionado on all-things weddings. And even though her time in the spotlight is over, that doesn’t mean she isn’t full of ideas on how her best friend’s wedding should look and feel and be! And it doesn’t take long for her to realize that maybe it’s not so much that she’s wanting to help as it is that she’s afraid of her own honeymoon ending.

The Bride’s Sister: Nothing screams unwanted relationship advice than when your younger sister gets married before you. It’s not that Harper doesn’t want to get married, after three failed engagements she really does! But finding the right man to walk down the aisle with is proving harder than she thought. And it gets even harder when constantly being compared to the perfect couple!

The Reluctant Bridesmaid: There is nothing Kayla wants more than to see one of her best friend’s get married…if only the whole process wasn’t so exhausting! Travel and adventure and being on the go fuels her. Having to stay in one place for an extended period of time while wearing taffeta? Not so much. Her job tends to take her away on a moment’s notice and this is one time she may have to pass up the trip of a lifetime in the name of friendship.

The Bridal Squad was a fun read. At first I thought the four storylines would be a bit much, but it really worked. I loved following these friends and seeing how they and their relationships changed throughout the book. It was fun for me because it gave me a glimpse into female friendships. I never really had a lot and those I did were not like this so it was nice to read about four close girlfriends. I really enjoyed it.

Julianne is getting married! She is really excited to start her life with her fiancé, a wonderful man she has known since high school, if only everyone would fall in line and stop the bickering. She wants her wedding, but she doesn't like all of the hassles of planning one. Everyone has their own opinions on what she should do and it is stressing her out. She is normally really put together and carefree, but her friends and family are driving her crazy. She is a Zumba instructor, but that is not enough. She needs a way to let out some of her frustrations so she tries a few things at the gym that will hopefully help. She just wants all this planning to be over with already.

Harper is Julianne's older sister and cause of stress during this busy time. She has been engaged three times, but none of them ever worked out. She thinks it is easy to fall in love, but how do you stay in love? How do you actually get to the alter? She isn't really sure. And her mom will not let her forget her failed engagements. Even though no one particularly cared for some of them that doesn't stop her mom from constantly making snide remarks to Harper about it. Man, she put up with a lot from her mom and it was probably always that way. With Julianne getting married it is making Harper think more about the possibility for herself, but how can she find the perfect guy like her sister did? And when she finds someone that has everything on her deal-breakers list should she give it a try anyways? Is it possible for her to find love with someone who on paper seems so wrong for her?

Then there is Kayla, the free spirit who doesn't want to be tied down. The photographer that always has a bag packed so she can leave and travel the world at a minutes notice. She has a friends with benefits thing going with her boss, but that is all it is. Right? I mean she wouldn't want more or to plan a future with someone...right? She likes to spread her wings and fly and even the thought of getting married gives her nightmares. How could you lose yourself in someone else like that. Oh, I loved Kayla. She is trying to figure things out and she takes her own time doing it. She is not one to rush into things like relationships and if you press her she will bail. She was fun.

And finally we have Natalie, the married friend. The one who takes every opportunity to bring up her own wedding when they are planning Julianne's. The one who wants to live this picture perfect life, but things don't always turn out like that. When there starts to be some cracks in the facade what will she do? Is she brave enough and strong enough to fight or will she give up in defeat? She was the most interesting for me as she tries to seem like she has everything together, but she doesn't. She tries to control everything, but you can't always control life.

Through this story we watch as these four ladies have their ups and downs, the fights, the makeups, the growing closer of the friends. At the beginning Harper and Kayla didn't get along so well with Natalie, but when she needs them they are there for her. I loved how they all were there for each other no matter what and where everyone ends up.