Searching for Perfect (Searching For #2) by Jennifer Probst 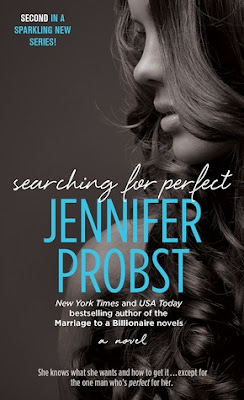 Kennedy vows to work her magic and transform this hot mess in a lab coat with a disastrous relationship track record into the most wanted man on the Verily dating scene. If only she could turn the wand on herself . . .

Though she radiates confidence and sex appeal, Kennedy harbors deep-seated insecurities from a tormented past and lifelong struggle with weight issues. When she realizes she and Nate are cut from the same cloth and might be perfect together, can Kennedy learn to let her heart lead the way? Or will her fears sentence her to the sidelines as Nate finds love—with someone else?

Searching for Perfect was such a cute read! Ken and Nate were adorable together! Oh I loved these two. Especially Nate. He was a lot of fun.

Ken works for a matchmaking firm and is running a speed dating night. She loves her job, loves matching people and helping them find connections. Only something goes amiss this time and she will not have that.

Nate shows up for speed dating looking for a wife. Only it doesn't go so well. His appearance is unkempt (for example he has a stains on his shirt) and he always says what he thinks. But not in a tactful way. He doesn't understand that anything is wrong with the way he is. He is looking for a wife, not some relationship that will go nowhere or a one night stand. He has focused on his job as an aerospace engineer for so long and now he is ready for his personal life to be better. He lives with his brother who tells him how to get women, and it might work for the brother, but the things he says definitely don't work for Nate. He puts people off with his unapologetic way of saying what he thinks. He doesn't know how to talk "normally" to girl and he can come across as a right jerk when he is really trying to find a connection. When he upsets one of the girls Ken, whom Nate had previously seen and thought was the most beautiful woman ever, pulls him aside and asks to meet him at the place across the street. She is all ready to set him straight and tell him his jerk ways are not appreciated...but she finds that he is being sincere. He doesn't know what he is doing wrong. It was really cute. She decides to take him on as a client, to give him a makeover and teach him the ways to find someone he is compatible with. Someone he will be happy with.

Along the way they both fall for the other of course. Nate liked Ken immediately and I loved him! The more time he spends with Ken the more he falls for her. Not only is she beautiful, but she is kind and smart and sweet and fun and everything. But Ken doesn't want to want Nate. She doesn't want to be falling for him. She shouldn't be. He is a client. It doesn't matter that her coworkers, her friends, don't mind and can see what is happening. When she realizes she has really fallen for him she tries to save him from herself. She is a mess! She has some issues and hangups still and normally I wouldn't enjoy this kind of storyline so much, but this one was so much fun I don't know how you couldn't love it! She tries to keep a lot of parts of herself hidden away, the fact that she is super smart and interested in aerospace engineering for example. That she understands what Nate is talking about when he talks about his job and asks questions and such. Only Nate could see right through her. He could see behind her shields and see who she really was. She has reasons for her insecurities, I totally understand, but Nate was so sweet with her. They are so good for each other and perfect together. I really enjoyed this story. It was a lot of fun and I can't wait to read more from this author.